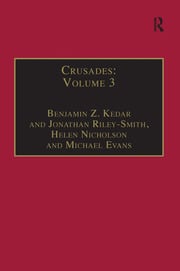 Crusades covers seven hundred years from the First Crusade (1095-1102) to the fall of Malta (1798) and draws together scholars working on theatres of war, their home fronts and settlements from the Baltic to Africa and from Spain to the Near East and on theology, law, literature, art, numismatics and economic, social, political and military history. Routledge publishes this journal for The Society for the Study of the Crusades and the Latin East. Particular attention is given to the publication of historical sources in all relevant languages - narrative, homiletic and documentary - in trustworthy editions, but studies and interpretative essays are welcomed too. Crusades appears in both print and online editions.

The third issue of the Crusades features articles from Denys Pringle on Crusader inscriptions, Bejamin Z. Kadar on the massacre of 15 July 1099 and Peter Frankopan on co-operation between Constantinople and Rome before the First Crusade.

Peter Frankopan, 'Co-operation between Constantinople and Rome before the First Crusade: a study of the convergence of interests in Croatia in the late 11th century'

Benjamin Z. Kedar, 'The massacre of 15 July 1099 in the historiography of the crusades'

Yuval Noah Harari, 'Eyewitnessing in accounts of the First Crusade: the Gesta Francorum and other contemporary narratives'

Joseph Drory, 'Some observations during a visit to Palestine by Ibn al-Arabi of Seville in 1092-1095'

Michael Stone, 'A notice about patriarch Aimery of Antioch in an Armenian Colophon of 1181'