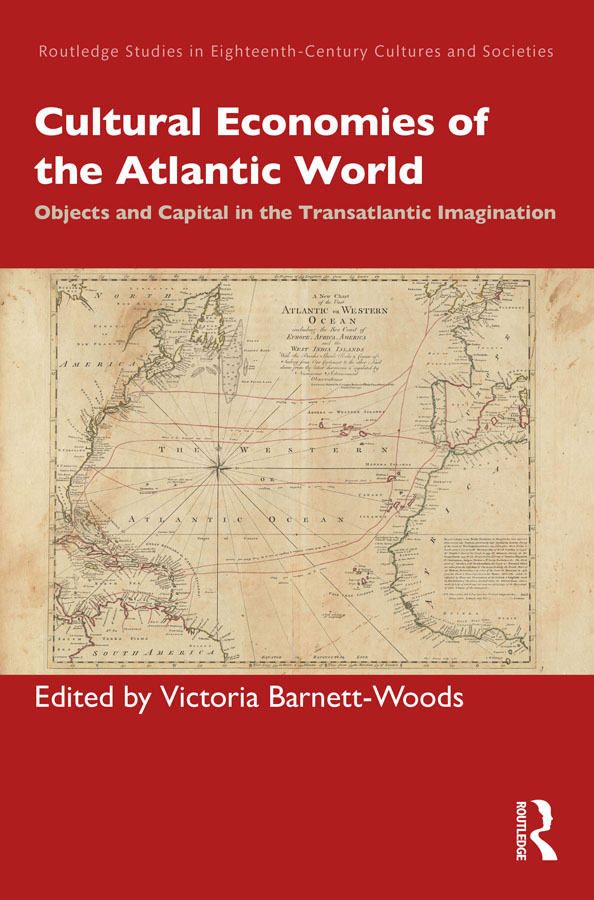 Cultural Economies of the Atlantic World

Objects and Capital in the Transatlantic Imagination, 1st Edition

Cultural Economies explores the dynamic intersection of material culture and transatlantic formations of "capital" in the long-eighteenth century. It brings together two cutting-edge fields of inquiry—Material Studies and Atlantic Studies—into a generative collection of essays that investigate nuanced ways that capital, material culture, and differing transatlantic ideologies intersected. This ambitious, provocative work provides new interpretive critiques and methodological approaches to understanding both the material and the abstract relationships between humans and objects, including the objectification of humans, into the larger current conversation about capitalism and inevitably, power, in the Atlantic world. Chronologically bracketed by events in the long-eighteenth century circum-Atlantic, these essays employ material case studies from littoral African states, to abolitionist North America, to Caribbean slavery, to medicinal practice in South America, providing both broad coverage and nuanced interpretation. Holistically, Cultural Economies demonstrates that the eighteenth-century Atlantic world of capital and materiality was intimately connected to both large and small networks that inform the hemispheric and transatlantic geopolitics of capital and nation of the present day.

Part I: Capitalized Bodies and the Imperial Imagination

2. Creolizing the Gothic Narrative: The Politics of Witchcraft, Gender and "Black" Magic in Charlotte Smith’s The Story of Henrietta

3. Black Medical Practitioners and Knowledge as Cultural Capital in the Greater Caribbean

Part II: Representation and Power in the Contact Zone

4. Materializing the Immaterial: Creating Capital in a Mirrored Image

5. Reading African Material Culture in the Contact Zone: Willem Bosman’s New and Accurate Description of the Coast of Guinea

6. Fetishes and the Fetishized: Material Culture and Obeah in the British Caribbean

7. Maple: The Sugar of Abolitionist Aspirations

8. Chocolate and the Atlantic Economy: Circuits of Trade and Knowledge

9. "The Only Property I Could Dispose of to Any Advantage": Textiles as Mediators in Early Irish Louisiana

11. Conveyance and Commodity: The Ordinary Merchant Ship in the British Atlantic, 1600–1800

12. "Unless Speedily Relieved from Old or New England, the Commoner Sort of People and the Slaves Must Starve": The Changing Nature and Networks of the Barbadian Import and Trade, 1680-1700

The long eighteenth century sits as a pivotal point between the early-modern and modern worlds. By actively encouraging an international focus for the series over all, both in terms of wide-ranging geographical topics and authorial locations, the series aims to feature cutting-edge research from established and recent scholars, and capitalize on the breadth of themes and topics that new approaches to research in the period reveal. This series provides a forum for recent and established historians to present new research and explore fresh approaches to culture and society in the long eighteenth century. As a crucial period of transition, the period saw developments that shaped perceptions of the place of the individual and the collective in the construction of the modern world. Eighteenth-Century Cultures and Societies is a series that is globally ambitious in scope and broad in its desire to publish cutting-edge research that takes an innovative, multi-vocal and increasingly holistic approach to the period. The series will be particularly sensitive to questions of gender and class, but aims to embrace and explore a variety of fresh approaches and methodologies.

This series wishes to become the first point of call for scholars and students interested in this period by capturing, promoting and disseminating exciting new socio-cultural research. The editors seek proposals for book-length studies from individual or multiple authors that focus on aspects of British, European or transnational culture and society for the period c.1680–1850. While proposals for regional/national case studies are welcome, all authors in the series will be expected to situate their research, historically and historiographically, in a wider international framework in order to ensure that it is accessible to students as well as scholars. Theoretically informed research will need to be presented clearly and accessibly. We envision volumes of 90,000–120,000 words in length (inclusive) and illustrated with c.15 – 20 images.