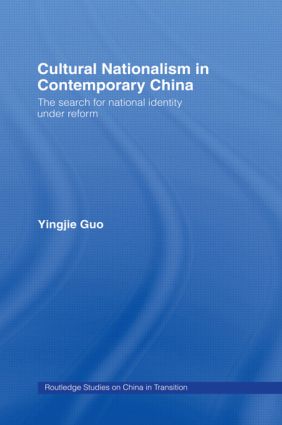 In the vast majority of literature on 'Chinese nationalism' the distinction between nation and state is rarely made, consequently nationalism usually appears as loyalty to the state rather than identification with the nation. Yet, since 1989, both the official configuration of the nation and the state's monopolized right to name the nation have come under rigorous challenge. Cultural Nationalism in Contemporary China relocates the discussion of nationalism to within a more contemporary framework which explores the disjunction between the people and the state and the relationship of each to the nation.

With its challenging exploration of one of the most neglected aspects of identity in China, this book should appeal to Asianists, China watchers and all of those with an interest in cultural and sociological phenomena in East Asia.

'Guo's study constitutes a major contribution to the unveiling of the ideological dimension of current discourses of cultural nationalism. Were the book to be read in China, it might help avert the entrenchment of a new nationalism, over which would inevitably reign an old, smiling, and undisputed Confucius.' - The China Quarterly

'Guo's book is a significant contribution to the discussion on Chinese nationalism, and a well-resourced account of the recent development and promotion of elite perceptions of nationhood and national identity from a cultural perspective.' - China Journal

Yingjie Guo is a lecturer in Chinese Studies at the Institute for International Studies, University of Technology, Sydney, Australia.