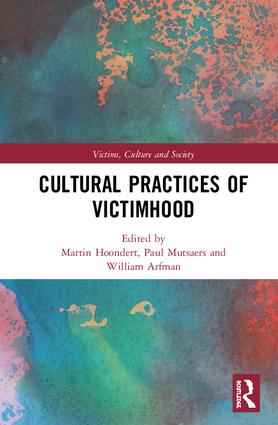 Cultural Practices of Victimhood aims to set the agenda for a cultural study of victimhood. Words such as ‘victim’ and ‘victimhood’ represent shifting cultural signifiers, their meaning depending on the cultural context of their usage. Using case studies and through a practice-based approach, questions are asked about how victimhood is defined and constructed, whether in the ritual commemoration of refugees on Lampedusa, the artistic practices of an Aboriginal artist such as Richard Bell, or the media practices associated with police violence.

Consisting of contributions by cultural studies experts with an interest in victim studies, this book seeks a double readership. On the one hand, it intends to break new ground with regards to a ‘cultural turn’ in the field of criminology, in particular victimology. On the other hand, it also seeks to open up discussions about a ‘victimological turn’ in culture studies. The volume invites scholars and advanced students active in both domains to reflect on victimhood in cultural practices.

"This book transcends the classic boundaries between disciplines in a remarkable way. In this collection of essays, victimology and cultural studies not only meet each other side by side but mutually feed into their epistemologies in a constructive way. The in-depth study of ritual, artistic and media practices related to victimisation processes in various contexts demonstrates how becoming and being a victim has to be understood as a dynamic phenomenon, beyond individualistic and legal conceptions. This book re-defines victimhood and helps to give meaning to victims’ experiences in a much needed way."

"This highly original edited volume sets a new agenda for victimology by situating the agency of victims in cultural practices. The authors and editors provide the first thorough exploration of this crucial intersection and open up a new research agenda which considers rituals, arts and the media as important sites where victimhood is performed. By carefully outlining processes and interaction situated in culture, the individual chapters offer important empirical insights to how victimhood is practiced from Berlin to Bosnia."

"This book provides absolutely novel insights in cultural practices relating to victimhood, centred in particular on ritual, artistic and media practices. Victimhood has been studied from many different angles, but the focus of this book will definitely enrich victimology. Through opening up the existing field of victimology, new and surprising insights with respect to victimhood and its narratives, scales, representations, mediatizations, twists, memorializations, complexities, absences and inversions will provide the reader with inspiration and food for thought."

2. A monument for boat refugees: ritual and the art of liminality (William Arfman)

4. Representing the experience of victims at the Berlin Wall Memorial Museum (David Clarke)

5. Victimhood in reverse: art in the age of apology (Lieke Wijnia)

7. Who speaks for the victim? Experiences of migrants and refugees in Jenny Erpenbeck’s novel Go, Went, Gone and Mikhail Shishkin’s Maidenhair (Odile Heynders)

Martin Hoondert studied musicology and theology and is specialized in music and rituals. Since 2007 he has been(associate) professor of Music, Religion and Ritual at the Department of Culture Studies of Tilburg University. His research focuses on ‘music and death’ and ‘practices of memorialization’.

studied cultural anthropology at Utrecht University and works as a police anthropologist for the Department of Culture Studies, Tilburg University, where he is employed as a postdoctoral researcher. He has previously worked at the Police Academy of the Netherlands, where he carried out his PhD research on police discrimination.

has a background in the archaeology and anthropology of Central America, as well as the comparative study of religion. Currently, he is a postdoctoral associate and lecturer in the field of ritual studies at Tilburg University. Favouring an interdisciplinary approach, his main research interests are late modern ritual dynamics, ritual innovation and traditionality, ritual and (community) art, and ritual commemoration.