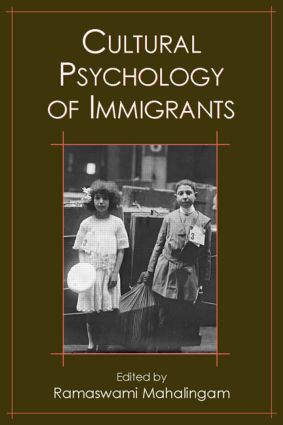 This new volume provides an interdisciplinary perspective on how intersections of race, class, gender, sexuality, and culture shape the cultural psychology of immigrants. It demonstrates the influence transnational ties and cultural practices and beliefs play on creating the immigrant self. Distinguished scholars from a variety of fields examine the cultural psychological consequences of displacement among different immigrant communities. Cultural Psychology of Immigrants opens with a variety of theoretical perspectives on immigration and a historical overview of sociological research on immigrants. It then examines the racial discrimination of immigrants and the multifaceted influences on the creation of immigrant identities. The final section documents the pivotal role of family contexts in shaping identity. Each chapter illustrates the commonalities and differences among immigrants in the ways in which they make sense of their newfound selves in a displaced context.

Intended for advanced students and researchers in the fields of psychology, social work, marriage and family therapy, public health, anthropology, sociology, education, and ethnic studies, the book also serves as a resource in courses on cultural psychology, immigrant studies, minority groups, race and ethnic relations, self and identity, culture and human development, and immigrants and mental health.

"This timely book focuses on the psychological experience of immigrants and refugees. This book will interest readers across the social sciences disciplines, including anthropology, sociology, ethnic studies, and social work as well as psychology. Recommended."

"…would recommend this book to professional care providers, educators, policymakers, psychologists, sociologists, anthropologists, and politicians. The chapters are well written, clear, concise, and, when added together, make a compelling and respectful case to treat immigrants as one would want to be treated."

Dept. of Sociology, The University of Western Ontario

"… A significant contribution to the scholarship on immigrant experiences."

"The editor demonstrates remarkable…familiarity with…interdisciplinary fields related to cultural studies…the book will be of most interest to scholars in the field of ethnic studies, social workers and public health professionals, sociologists, psychologists, and anthropologists…I would…recommend it to colleagues as an introduction to the study of culture…"