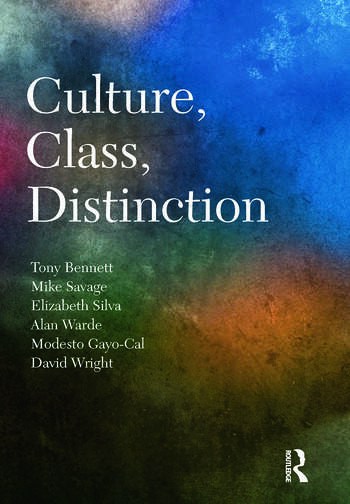 Culture, Class, Distinction is major contribution to international debates regarding the role of cultural capital in relation to modern forms of inequality.  Drawing on a national study of the organisation of cultural practices in contemporary Britain, the authors review Bourdieu’s classic study of the relationships between culture and class in the light of subsequent debates.

In doing so they re-appraise the relationships between class, gender and ethnicity, music, film, television, literary, and arts consumption, the organisation of sporting and culinary practices, and practices of bodily and self maintenance.  As the most comprehensive account to date of the varied interpretations of cultural capital that have been developed in the wake of Bourdieu’s work, Culture, Class, Distinction offers the first systematic assessment of the relationships between cultural practice and the social divisions of class, gender and ethnicity in contemporary Britain.

It is essential reading for anyone interested in the relationships between culture and society.

The book is co-authored by Tony Bennett, Mike Savage, Elizabeth Silva, Alan Warde, Modesto Gayo-Cal and David Wright. The book arises out of research conducted at the Economic and Social Research Council Centre for Research on Socio-cultural Change (CRESC), a major international cente for the analysis of socio-cultural change.

Tony Bennett is Research Professor of Social and Cultural Theory in the Centre for Cultural Research at the University of Western Sydney, and a Professorial Fellow in the Faculty of Arts at the University of Melbourne. Recent publications include Pasts Beyond Memory: Evolution, Museums, Colonialism; New Keywords: A Revised Vocabulary of Culture and Society (edited with Larry Grossberg and Meaghan Morris) and Handbook of Cultural Analysis (edited with John Frow).

Mike Savage is Professor of Sociology at the University of Manchester and Director of the ESRC Centre for Socio-Cultural Change (CRESC). His interests are in social stratification, urban, and historical sociology.

Alan Warde is Professor of Sociology at the University of Manchester. His current research interest include the sociology of consumption, with particular emphasis on food, cultural sociology, social stratification and economic sociology.

Modesto Gayo-Cal is an Assistant Professor in the School of Sociology at Diego Portales University, in Santiago de Chile. His main areas of interest are: middle class politics, cultural participation and inequalities, and theories of nationalism. He was a research fellow on the Cultural Capital and Social Exclusion Project at the ESRC Centre for Research on Socio-cultural Change (CRESC), based at the University of Manchester.

David Wright has published extensively in the field of cultural sociology and is an Assistant Professor in Cultural Policy Studies at the University of Warwick. He was a research fellow on the Cultural Capital and Social Exclusion Project at the ESRC Centre for Research on Socio-cultural Change (CRESC), based at the Open University.

'Many books are being written about Pierre Bourdieu, turning him into a theoretical "classic". But Bennett, Savage and their colleagues have written a book to read alongside Bourdieu, using his work as a model and stimulation for continuing empirical inquiry. With rich new data they tackle the question of how specific Bourdieu’s famous analysis of Distinction is to France. They show tastes are different in Britain, but that the analytic framework linking tastes to class, cultural capital and habitus is not only transportable but effective and revealing. This is an important book.'
-Craig Calhoun, President of the Social Science Research Council

'Culture, Class, Distinction defines the new research frontier in the sociological understanding of the intersection of culture and inequality. Resolutely empirical in orientation, the authors creatively build on and go beyond the seminal work of Pierre Bourdieu to consider simultaneously symbolic boundaries in the context of racial and ethnic diversity, gendered patterns of cultural preferences, specific fields of cultural practices (reading, music, the visual arts, the body), and much more. Social scientists within and beyond the UK have much to learn from this ambitious and path-breaking collective research.'
-Michèle Lamont, Professor of Sociology at Harvard University.

'A superb achievement: at once a cogent theoretical reappraisal of Bourdieu's masterwork of 20th century sociology, and a uniquely wide-ranging study, offering powerful insights, into the changing contours of culture in British society today. Like Distinction, this book will remain a centrepiece of international sociology.'
-Georgina Born, Professor of Sociology, Anthropology and Music, University of Cambridge

'Culture, Class, Distinction is the most sophisticated mapping of British cultural practices and preferences ever undertaken. Using cutting-edge techniques of statistical analysis and engaging critically with the sociology of culture developed by Pierre Bourdieu, it explores the cultural dimensions of class, gender and ethnicity across a range of fields. This is a major contribution to understanding the roots of social inclusion and exclusion in British life, and a complex and subtle piece of social theory.'
-John Frow, Professor of English at School of Culture & Communication University of Melbourne

'The amount of labour that has gone into this work is nothing short of impressive. One can only be grateful for the information produced by the authors concerning the relation between social location and cultural practice in Britain today. But the book does a lot more than this. It offers a highly nuanced analysis of this information. It is an excellent example of how one can innovate theoretically while doing empirical research.'
-Ghassan Hage, Professor of Anthropology and Social Theory, University of Melbourne

'Bennett et al. will have a deservedly wider appeal. Anyone who teaches Distinction should draw on this work both for its empirical findings and the quality of its assessment of the arguments made by Bourdieu.'
-Ted Ulas, University of Sussex, in Cultural Sociology