Culture and Civilization
Cosmopolitanism and the Global Polity 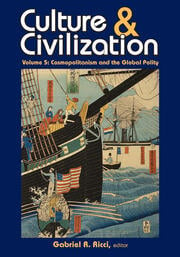 Culture and Civilization: Cosmopolitanism and the Global Polity

This volume of Culture and Civilization focuses on cosmopolitanism, the global polity, and political ramifications of globalization. The introduction by Gabriel R. Ricci establishes context and provides an overview of the entire work. Topics include the history of globalization, climate change policy, ecological consequences of development, concepts of civilization, human rights, Eastern thought and economics, global citizenship, and travel writing.

This volume of Culture and Civilization, the first under Ricci's editorship, follows the tradition of the previous four volumes - developing critical ideas intended to produce a positive intellectual climate, one that is prepared to confront challenges and alert us to the opportunities, for people in all fields and of all faiths, of the twenty-first century.