Culture and Civilization
Volume 4, Religion in the Shadows of Modernity 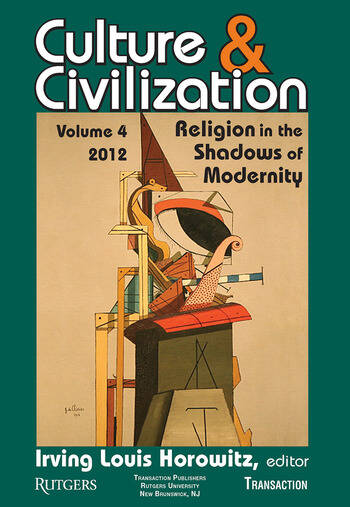 Culture and Civilization: Volume 4, Religion in the Shadows of Modernity

Debates on the meaning of religious belief in an advanced technological age have established the emergence of religion as a fact of daily life. The nineteenth-century imagery of "warfare" between science and religion is long dismissed. Emphasizing this fact of the continuing relevance and importance of religion as a driving force in contemporary life is the stunning emergence on the world scene of militant Muslim beliefs in a period of relatively inactive religious belief elsewhere. In this volume of Culture and Civilization, religion is examined in the context of post-modern societies.

The collection of essays is divided by themes: religions, civilizations, cultures, and the history of ideas. The contributors William Donohue, Simon Kuznets, A. L. Kroeber, Greg Mills, Yoani Sanchez, Murray Weidenbaum, Andreas Herberg-Rothe, Daniel Bell, John W. Gardner, John Charles, and Liu Xiaobo's discuss a variety of topics, with titles including "The Catholic Church and Sexual Abuse," "Why is Africa Poor?," "Freedom and Exchange in Communist Cuba," and the "Economic Structure and the Life of the Jews."

This volume concludes with a grouping of review essays on famous figures ranging from Crane Brinton and Herbert Spencer to Max Gluckman and Hannah Arendt. The volume as a whole projects a sense of the future and avoids hysteria about the past. The contributors have a sharp edge and speak in a critical voice to the dilemmas of the present world order.