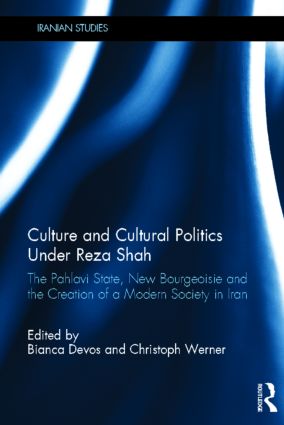 The Pahlavi State, New Bourgeoisie and the Creation of a Modern Society in Iran, 1st Edition

Culture and Cultural Politics Under Reza Shah presents a collection of innovative research on the interaction of culture and politics accompanying the vigorous modernization programme of the first Pahlavi ruler. Examining a broad spectrum of this multifaceted interaction it makes an important contribution to the cultural history of the 1920s and 1930s in Iran, when, under the rule of Reza Shah Pahlavi, dramatic changes took place inside Iranian society. With special reference to the practical implementation of specific reform endeavours, the various contributions critically analyze different facets of the relationship between cultural politics, individual reformers and the everyday life of modernist Iranians.

Interpreting culture in its broadest sense, this book brings together contributions from different disciplines such as literary history, social history, ethnomusicology, art history, and Middle Eastern politics. In this way, it combines for the first time the cultural history of Iran’s modernity with the politics of the Reza Shah period.

Challenging a limited understanding of authoritarian rule under Reza Shah, this book is a useful contribution to existing literature for students and scholars of Middle Eastern History, Iranian History and Iranian Culture.

Dr Bianca Devos is Assistant Professor at the Center for Near and Middle East Studies at the University of Marburg (Germany). Her main fields of research are Iran’s modern history, particularly the press and early modern entrepreneurship, and literary history.

holds the chair of Iranian Studies at the Center for Near and Middle East Studies at the University of Marburg (Germany). His main fields of interest are Qajar history, vaqf studies, and modern Persian literature.