Culture and Economy in the Age of Social Media 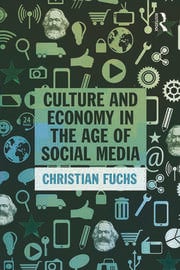 Culture and Economy in the Age of Social Media

Understanding social media requires us to engage with the individual and collective meanings that diverse stakeholders and participants give to platforms. It also requires us to analyse how social media companies try to make profits, how and which labour creates this profit, who creates social media ideologies, and the conditions under which such ideologies emerge. In short, understanding social media means coming to grips with the relationship between culture and the economy. In this thorough study, Christian Fuchs, one of the leading analysts of the Internet and social media, delves deeply into the subject by applying the approach of cultural materialism to social media, offering readers theoretical concepts, contemporary examples, and proposed opportunities for political intervention.

Culture and Economy in the Age of Social Media is the ultimate resource for anyone who wants to understand culture and the economy in an era populated by social media platforms such as Twitter, Facebook, and Google in the West and Weibo, Renren, and Baidu in the East. Updating the analysis of thinkers such as Raymond Williams, Karl Marx, Ferruccio Rossi-Landi, and Dallas W. Smythe for the 21st century, Fuchs presents a version of Marxist cultural theory and cultural materialism that allows us to critically understand social media’s influence on culture and the economy.

"In presenting his analysis, Fuchs displays an extensive command of the literature of cultural analysis as well as an equally impressive familiarity with the work of Marx and those who analyze it. In short, this valuable book offers very insightful analysis into the nature of life in the contemporary world, which may offer some guidance for improving the condition of modern life." - M. Perelman, California State University, Chico, Highly Recommended Review in CHOICE

"This book is a tour de force. Drawing on a comprehensive re-reading of Marx and critical theory, Christian Fuchs demonstrates how everyday activity on social media is integral to the system of global exploitation that is restructuring contemporary capitalism. His powerful critique of the promotional rhetorics surrounding the Internet and his call for action deserves to be read and debated by anyone seriously interested in the future directions of economic and cultural life." —Graham Murdock, Professor of Culture and Economy, Loughborough University

"Christian Fuchs’s excellent book demonstrates why social media must be analysed critically as both an economic and a cultural phenomenon, unlike the conservatism of idealist social science, which has much to say about communication yet is silent about the materiality of communications." —Jim McGuigan, author of Cool Capitalism