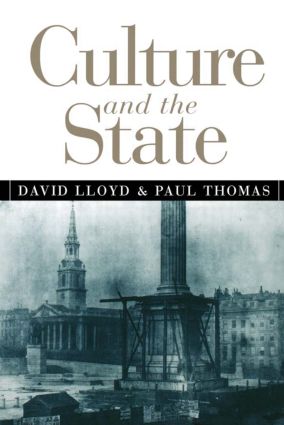 Culture and the State

From the end of the eighteenth century to the late nineteenth century, a remarkable convergence takes place in Europe between theories of the modern state and theories of culture. Culture and the State explores that theoretical convergence in relation to the social functions of state and cultural institutions, showing how cultural education comes to play the role of forming citizens for the modern state. It critiques the way in which materialistic thinking has largely taken the concept of culture for granted and failed to grasp its relation to the idea of the state.

"…Lloyd and Thomas have achieved an original and valuable account of the ideological power of aesthetic discourse. This splendidly intelligent book will make necessary reading not just for Victorianists or Marxist theorists, but for anyone with any serious interest in cultural critique." -- Victorian Studies

"Culture and the State is brilliant in its conception and absolutely needed in order to both hisoricize and problematize the relationship between culture and the state in light of the current debates… The authors do not merely add another theoretical wrinkle to the issue of the relationship among schook, culture, and the state, but offer a fresh, innovative, original, and much needed take on the subject." -- Henry A. Giroux, Editor of Education and Cultural Studies