Current Controversies in Philosophy of Film 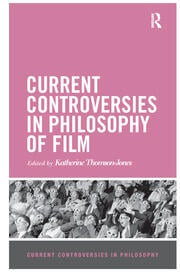 Current Controversies in Philosophy of Film

This volume advances the contemporary debate on five central issues in the philosophy of film. These issues concern the relation between the art and technology of film, the nature of film realism, how narrative fiction films narrate, how we engage emotionally with films, and whether films can philosophize. Two new essays by leading figures in the field present different views on each issue. The paired essays contain significant points of both agreement and disagreement; new theories and frameworks are proposed at the same time as authors review the current state of debate. Given their combination of richness and clarity, the essays in this volume can effectively engage both students, undergraduate or graduate, and academic researchers.

Introduction Katherine Thomson-Jones PART I: What is the relation between the art and the technology of film?1. Cinematic Art and Technology Berys Gaut 2. Movie Appreciation and the Digital Medium Katherine Thomson-Jones PART II: In what ways is film a realistic medium? 3. Imagined Seeing and Some Varieties of Cinematic Realism George M. Wilson 4. Realism in Film (and other representations) Robert Hopkins PART III: How do films work as narrative fictions? 5. Fictional Indeterminacy, Imagined Seeing and Cinematic Narration Angela Curran 6. Motion Picture Narration Noël Carroll PART IV: How do films engage our emotions? 7. Putting Cognition in its Place: Affect and the Experience of Narrative Film Carl Plantinga 8. A Neurophysiological Foundation for Cinematic Empathy Dan Shaw PART V: Can films philosophize? 9. Film-As-Philosophy: The Pro Position Thomas E. Wartenberg 10. Film, Philosophy, and the Varieties of Artistic Value Murray Smith

Katherine Thomson-Jones is an associate professor of philosphy at Oberlin College.

"In this gem of a collection leading philosophers thrash out answers to the five questions that drive cutting edge research in cinematic aesthetics. A perfect introduction to the philosophy of film that invites readers into the heart of debates about what movies are, how they work, and what they mean for us."

"Key philosophers of film discuss central and enduring questions in this excellent collection. Essays address the technological basis of film, cinematic realism, narrative, emotional engagement, and the debate about film-as-philosophy. A must-have for philosophers and their students, this is a valuable addition to the vibrant but still fairly young area of philosophy of film."

"Current Controversies in Philosophy of Film presents fascinating and productive exchanges of views about several of the most important issues concerning the nature of the film medium. An excellent entry into the heart of the topic."

"In Current Controversies in Philosophy of Film Thomson-Jones has invited ten leading experts to write new articles on core issues in the field. Each section juxtaposes opinions on five central topics—technology, realism, narration, emotions, and whether film can philosophize. The selections include both sharpened versions of established views and newer perspectives on topics like imagination and empathy. Thomson-Jones provides a clear and incisive introduction. This book will be an asset on scholars’ shelves and will also make a terrific text for any upper-level course on film and philosophy."