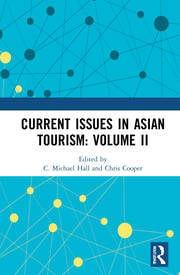 This volume focuses on three aspects of Asian tourism. Firstly, the section on marketing, consumption and demand for Asian tourism includes papers on mega events, creative experiences, World Heritage Sites and pollution. Secondly, a group of papers focus on sustainable Asian tourism destinations including papers on investment, climate change, energy and local food. Finally, there are two chapters on Asian tourism research methods including the use of photography and qualitative methods.

The papers in this book were originally published in Current Issues in Asian Tourism.

1. Introduction to Current Issues in Asia: COVID-19 and beyond

2. Tourist arrivals in Korea: Hallyu as a pull factor

3. Local and international perspectives of the influence of creative experiences of Chinese traditional culture on revisit intentions

4. A study of segmentation of cannabis-oriented tourists from China based on motivation

5. A journey of hope: an institutional perspective of Japanese outbound reproductive tourism

11. Understanding the role of local food in sustaining Chinese destinations

12. How to improve tourism energy efficiency to achieve sustainable tourism: evidence from China

13. The interaction effect of tourism and foreign direct investment on urban–rural income disparity in China: a comparison between autonomous regions and other provinces

14. Towards an understanding of Chinese tourist photography: evidence from the UK

C. Michael Hall is Professor of Marketing in the Department of Management, Marketing and Entrepreneurship at the University of Canterbury, New Zealand; Docent in Geography, University of Oulu, Finland; and a visiting professor at Linnaeus University, Kalmar, and Lund University, Helsingborg, Sweden. He has written widely on tourism, regional development, sustainability and gastronomy. He is co-Editor, with Chris Cooper, of the journal Current Issues in Tourism.

is Professor of Tourism at Leeds Beckett University, UK. He has published and edited widely in tourism. He works with international tourism agencies, including the UNWTO and was awarded the United Nations WTO Ulysses prize for contributions to tourism policy and education in 2009. He is co-Editor, with C. Michael Hall, of the journal Current Issues in Tourism.