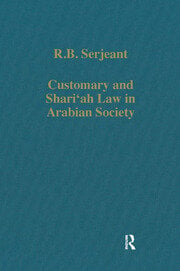 Contents: Preface; The Da’if and the Mustad’af and the status accorded to them in the Qur’an; The Caliph ’Umar’s letters to Abu Musa al-Ash’ari and Mu’awiya; The interplay between tribal affinities and religious (Zaydi) authority in the Yemen; The ’Awdhillah Confederation with some reference to al-Hamdani; Dawlah, tribal shaykhs, the Mansab of the Waliyyah Sa’idah, qasamah, in the Fadli sultanate, South Arabian Federation; Yafi’, Zaydis, Al Bu Bakr b. Salim and others: tribes and Sayyids; The Ma’n ’Gypsies’ of the East Aden Protectorate; A Judeo-Arab housedeed from Habban (with notes on the former Jewish communities of the Wahidi Sultanate); Famine death without loss of honour in ancient Arabia and Yemeni Arhab; The ’White Dune’ at Abyan: an ancient place of pilgrimage in Southern Arabia; Forms of plea: a Safi’i manual from al-Sihr; Two tribal law cases (documents), Wahidi Sultanate, South-west Arabia; Recent marriage legislation from al-Mukalla, with notes on marriage customs; Sex, birth, circumcision, some notes from South-west Arabia; Maritime customary law off the Arabian coasts; Omani naval activities off the Southern Arabian coast in the late 11th/17th centuries, from Yemeni chronicles; Notes on the ’Frankish Chancre’ (syphilis) in Yemen, Egypt and Persia; Notes on some aspects of Arab business practices in Aden; Index.

’Serjeant’s contribution to South Arabian Studies has been great and it is therefore useful to have so much of his work available in the Variorum reprint series.’ Journal of Semitic Studies