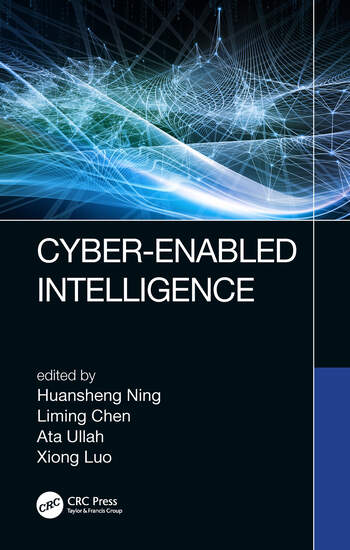 The book provides an advanced vision and trends of computational intelligence in cyberspace and cyber-enabled spaces. It reviews  architectures and models, as well as state-of-the-art computational and interpretation capabilities for social, industrial, and multimedia applications. Cyber-enabled intelligence involves the design and development of intelligent and innovative application scenarios in social networks, computer vision, multimedia, and image processing. Application scenarios can also cover the applicability of intelligent sensing, data collection and predictive analysis in Internet of Things.

Huansheng Ning, PhD, earned his PhD from Beihang University in 2001.

Currently, he is a professor and vice dean of the School of Computer and

and technology. Dr. Ning is the founder of Cyberspace and Cybermatics

International Science and Technology Cooperation Base, and co-founder and

and Applications. He serves as a steering committee member of IEEE Internet of

Things Journal and associate editor of IEEE System Journal. He is co-chair of IEEE

Transactions on Cybermatics. He hosted the 2013 World Cybermatics Congress and

the 2015 Smart World Congress as the joint executive chair. Dr. Ning received the

Society Golden Core Award in 2014. He is an IET fellow and IEEE senior member.

Science and Informatics at De Montfort University, Leicester, UK. He earned his

BEng and MEng from Beijing Institute of Technology (BIT), China, and his PhD

user-centered intelligent systems and their applications in smart healthcare. He is

and conference and workshop articles in the above areas. Dr. Chen is an IET fellow,

an IEEE senior member, a co-founder and co-director of the UK-China Gait

, earned his BS and MS in Computer Science from COMSATS

rejoined NUML in September 2018. He has supervised 112 projects. He has

authored several papers in impact factor journals and contributed to books as well.

He is also a reviewer and guest editor. His areas of interest are WSN, IoT, cyber

, earned his PhD from Central South University, China, in

University, China. From 2012 to 2013, he was a visiting scholar at Arizona State

University, USA. He currently works as a full professor in the School of Computer

and Communication Engineering, University of Science and Technology,

computing, and cyber-physical systems. He has published extensively in his areas

of interest in journals such as IEEE Transactions on Industrial Informatics, IEEE

Systems. Prof. Luo is a senior member of IEEE. He was a recipient of the 2002 IEEE