Cyber-Physical Systems
From Theory to Practice 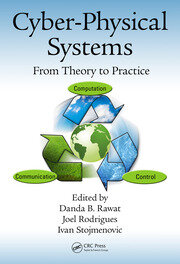 Cyber-Physical Systems: From Theory to Practice

Cyber-Physical Systems: From Theory to Practice provides state-of-the-art research results and reports on emerging trends related to the science, technology, and engineering of CPS, including system architecture, development, modeling, simulation, security, privacy, trust, and energy efficiency. It presents the research results of esteemed professionals on cutting-edge advances in cyber-physical systems that include communications, computing, and control.

The book consists of eight sections, each containing chapters contributed by leading experts in the field. Each section covers a different area that impacts the design, modeling, and evaluation of CPS, including:

With the CPS field advancing so rapidly, this book is an ideal reference to help researchers, system designers, and practitioners manufacture devices that are compatible with CPS standards. Presenting numerous examples that illustrate practical applications derived from theory, the book is also suitable for use as a textbook in upper undergraduate and graduate-level university courses.

He is the leader of the Cybersecurity, Wireless Systems, and Networking Innovations (CWiNs) Lab’s Research Group (http://www.CWiNs.org) at GSU. His research is supported by the U.S. National Science Foundation and the Center for Sustainability grants. Dr. Rawat has published more than 130 scientific/technical articles. He has served as an editor/guest editor on over 10 international journals. He serves as webmaster for IEEE INFOCOM 2016, student travel grant cochair of IEEE INFOCOM 2015, track chair for wireless networking and mobility of IEEE CCNC 2016, track chair for Communications Network and Protocols of IEEE AINA 2015, and many others. He has served as a program chair, general chair, and session chair for numerous international conferences and workshops, and has served as a technical program committee (TPC) member for several international conferences including IEEE GLOBECOM, IEEE CCNC, IEEE GreenCom, IEEE AINA, IEEE ICC, IEEE WCNC, and IEEE VTC conferences.