D.H. Lawrence's Australia
Anxiety at the Edge of Empire 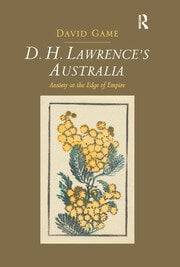 D.H. Lawrence's Australia: Anxiety at the Edge of Empire

The first full-length account of D.H. Lawrence’s rich engagement with a country he found both fascinating and frustrating, D.H. Lawrence’s Australia focuses on the philosophical, anthropological and literary influences that informed the utopian and regenerative visions that characterise so much of Lawrence’s work. David Game gives particular attention to the four novels and one novella published between 1920 and 1925, what Game calls Lawrence’s 'Australian period,' shedding new light on Lawrence’s attitudes towards Australia in general and, more specifically, towards Australian Aborigines, women and colonialism. He revisits key aspects of Lawrence’s development as a novelist and thinker, including the influence of Darwin and Lawrence’s rejection of eugenics, Christianity, psychoanalysis and science. While Game concentrates on the Australian novels such as Kangaroo and The Boy in the Bush, he also uncovers the Australian elements in a range of other works, including Lawrence’s last novel, Lady Chatterley’s Lover. Lawrence lived in Australia for just three months, but as Game shows, it played a significant role in his quest for a way of life that would enable regeneration of the individual in the face of what Lawrence saw as the moral collapse of modern industrial civilisation after the outbreak of World War I.

Darwinism and Lawrence's quest for regeneration: 'a new conception of what it means, to live'.  Regeneration, the rejection of eugenics, and Rananim in Australia.  Lawrence decides to travel to Australia. Imagining Australia: 'The Vicar's Garden', The White Peacock, The Daughter-in-Law, 'The Primrose Path', The Lost Girl, Aaron's Rod, and Mr Noon.  'Pommy', 'Pommygranate', and 'Pommigrant' in Kangaroo: Mr and Mrs Somers, the amateur emigrants. Aspects of degeneration in Kangaroo - 'A novel, shot with a wayward beauty'.  'Kangaroo' and the spirit of Australia. The race for the bush: the Australian Aboriginal presence and British race regeneration in Kangaroo and The Boy in the Bush. Matriarchy, mates and bigamy in The Boy in the Bush.  The aristocrat in the bush: some textual origins for the questing hero in The Boy in the Bush.  Out of place: colonial Australians in St. Mawr. Last words: 'Preface to Black Swans', 'The Hand', Lady Chatterley's Lover, 'Eve in the Land of Nod', P.R. Stephensen - Mandrake press and 'Introduction to Pansies', Mimosa Letters.

David Game is a Visiting Fellow at the School of Literature, Languages and Linguistics, Australian National University, Canberra, Australia.

"D. H. Lawrence’s Australia is a model of scholarly research, wide-ranging in its reference, written in a lively and accessible style. It is likely to be the most authoritative book on the subject for some time to come." – Neil Roberts, JDHLS 2016