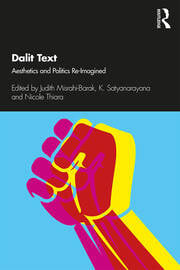 This book, companion to the much-acclaimed Dalit Literatures in India, examines questions of aesthetics and literary representation in a wide range of Dalit literary texts. It looks at how Dalit literature, born from the struggle against social and political injustice, invokes the rich and complex legacy of oral, folk and performative traditions of marginalised voices. The essays and interviews systematically explore a range of literary forms, from autobiographies, memoirs and other testimonial narratives, to poems, novels or short stories, foregrounding the diversity of Dalit creation. Showcasing the interplay between the aesthetic and political for a genre of writing that has ‘change’ as its goal, the volume aims to make Dalit writing more accessible to a wider public, for the Dalit voices to be heard and understood. The volume also shows how the genre has revolutionised the concept of what literature is supposed to mean and define.

Judith Misrahi-Barak is an associate professor at University Paul Valéry Montpellier 3, France. She has published widely on Caribbean and Indo- and Sino-Caribbean writers, and diaspora literatures. She is general editor of the series PoCoPages. She co-edited Dalit Literatures in India with Joshil K. Abraham (2015; 2nd edition 2018) and was co-investigator on the AHRC Research Network series ‘Writing, Analysing, Translating Dalit Literature’ (2014–16). She has written several entries on Dalit Literature and Dalit writers for the forthcoming Dictionnaire encyclopédique des littératures indiennes (DELI).

K. Satyanarayana is a professor in the Department of Cultural Studies at the English and Foreign Language University, Hyderabad, India. He co-edited two volumes of new Dalit writing: No Alphabet in Sight (2011), Steel Nibs Are Sprouting (2013) and, most recently, Dalit Studies (2016). His research interests are in the fields of Dalit studies, literary history, and cultural theory. He is a regular commentator on Dalit issues in the media and public forums.

Nicole Thiara teaches postcolonial and contemporary literature at Nottingham Trent University, UK. She has written Salman Rushdie and Indian Historiography: Writing the Nation into Being (2009) and articles on Dalit literature, contemporary South Asian literature and the British Asian diaspora. She was the principal investigator on the AHRC Research Network series ‘Writing, Analysing, Translating Dalit Literature’ (2014–16).

"This book makes a critically important contribution to the growing, but still impoverished, field of Dalit literary studies in two key ways. First, the editors and contributors to Dalit Text refuse an engagement with Dalit literature’s politics in lieu of its aesthetics, and in so doing, rightfully reject the all-too-common sociological approach to Dalit literature that blinds us to the meaningful employment of innovative narrative strategies that has been at the core of Dalit literary production from its earliest stages. Second, the book makes a commitment to highlighting several new voices of Dalit literature and literary criticism, voices that will emerge for the first time in an edited volume that will have extensive transnational reach. Such a political commitment to representing a diversity of voices – in several different languages – from within Dalit literary and scholarly circles in India and its diaspora will play a critical role in contributing to the growth and sophistication of the field of Dalit literary studies. This volume is desperately needed, and most welcome." — Laura Brueck, Associate Professor of South Asian Languages and Cultures, Northwestern University, Evanston, IL USA

"This contribution to the extant body of scholarship on Dalits, now a recognized area of academic attention world-wide, forcefully intensifies the field and begins to widen it. Necessary reading for anyone interested in justice in its various forms. This book goes a long way to study newer aspects of Dalit studies."

"A profound inquiry into the relation between the category ‘Dalit’ on the one hand and artistic and literary practice on the other, this landmark volume brings together writers, critics and translators to engage the force of Dalit writing in several Indian languages. The result of an international collaboration, this volume crucially brings questions of translation and universalization to the very untranslatability of the term ‘Dalit.’" —- Simona Sawhney, Associate Professor, Humanities & Social Sciences, Indian Institute of Technology, Delhi, India