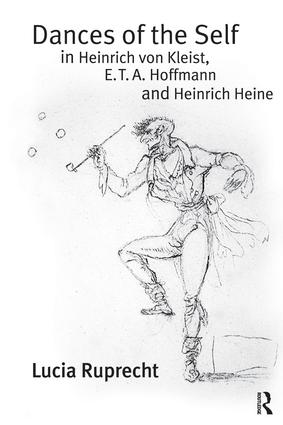 Dances of the Self in Heinrich von Kleist, E.T.A. Hoffmann and Heinrich Heine

Lucia Ruprecht's study is the first monograph in English to analyse the relationship between nineteenth-century German literature and theatrical dance. Combining cultural history with close readings of major texts by Heinrich von Kleist, E.T.A. Hoffmann and Heinrich Heine, the author brings to light little-known German resources on dance to address the theoretical implications of examining the interdiscursive and intermedial relations between the three authors' literary works, aesthetic reflections on dance, and dance of the period. In doing so, she not only shows how dancing and writing relate to one another but reveals the characteristics that make each mode of expression distinct unto itself. Readings engage with literary modes of understanding physical movement that are neglected under the regime of eighteenth-century aesthetic theory, and of classical ballet, setting the human, frail and expressive body against the smoothly idealised neoclassicist ideal. Particularly important is the way juxtaposing texts and performance practice allows for the emergence of meta-discourses about trauma and repetition and their impact on aesthetics and formulations of the self and the human body. Related to this is the author's concept of performative exercises or dances of the self which constitute a decisive force within the formation of subjectivity that is enacted in the literary texts. Joining performance studies with psychoanalytical theory, this book opens up new pathways for understanding Western theatrical dance's theoretical, historical and literary continuum.

Prize: Special Citation winner for the 2007 de la Torre Bueno prize for dance books published in 2006. Awarded by the American Society for Dance History Scholars 'Rooted in solid literary scholarship and innovative dance analysis, Ruprecht introduces English-speaking readers to important European discourses on dance and aesthetics, revealing social and political issues in the Romantic era, as well as suggesting new ways to link literature, modern subjectivity, and the dancing body.' Jennifer Fisher, University of California, Irvine ’Lucia Ruprecht has carefully studied …'canonical' textual sources and has brought together fascinating material with sparkling and elucidating readings. This book will help all those who wish to study the transformation of early Romantic ideals of the moving body into a sensibility of the dancing body as post-modern performance.’ Dance Research ’Dances of the Self is lucid and largely free of terminological jargon. One major success must be the dual achievement of finding not only dancing selves in the texts discussed, but texts which themselves 'dance' in formal terms, making this a wider contribution to the history of classical and Romantic aesthetics.’ Modern Language Review

Contents: Introduction; Dance, writing and trauma; Heinrich von Kleist and the mechanics of grace; E.T.A. Hoffmann and the true art of dance; Heinrich Heine and the new language of the body; Conclusion; Bibliography; Index.