Dancing in Damascus
Creativity, Resilience, and the Syrian Revolution 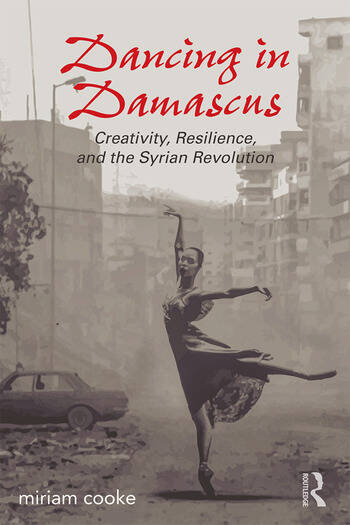 Dancing in Damascus: Creativity, Resilience, and the Syrian Revolution

On March 17, 2011, many Syrians rose up against the authoritarian Asad regime that had ruled them with an iron fist for forty years. Initial successes were quickly quashed, and the revolution seemed to devolve into a civil war pitting the government against its citizens and extremist mercenaries. As of late 2015, almost 300,000 Syrians have been killed and over half of a total population of 23 million forced out of their homes. Nine million are internally displaced and over four million are wandering the world, many on foot or in leaky boats. Countless numbers have been disappeared. These shocking statistics and the unstoppable violence notwithstanding, the revolution goes on.

The story of the attempted crushing of the revolution is known. Less well covered has been the role of artists and intellectuals in representing to the world and to their people the resilience of revolutionary resistance and defiance. How is it possible that artists, filmmakers and writers have not been cowed into numbed silence but are becoming more and more creative? How can we make sense of their insistence that despite the apocalypse engulfing the country their revolution is ongoing and that their works participate in its persistence? With smartphones, pens, voices and brushes, these artists registered their determination to keep the idea of the revolution alive. Dancing in Damascus traces the first four years of the Syrian revolution and the activists’ creative responses to physical and emotional violence.

1. Cracking the Wall of Fear

With deep knowledge and admirable clarity, miriam cooke here describes and analyses the written, painted, directed, sung, danced and filmed responses to revolution, repression and war in Syria. Dancing in Damascus is an indispensable reminder of the essential uses of art anywhere in times of crisis -- to reflect on disruption and heal trauma, to mobilise, to consecrate human meaning in the face of violence, and to formulate revolutionary horizons. The book also provides a necessary record of the creative processes, usually ignored in Western accounts, which exist at the revolution's heart, despite, and in reply to, the destruction wrought by the counter-revolutions. -- Robin Yassin-Kassab, co-author of Burning Country: Syrians in Revolution and War

By analyzing the diverse types of cultural productions and writing this book five years after the beginning of the people’s revolt against the authoritarian ruling regime, miriam cooke has revived the initial spirit of the revolution. Putting the Syrian people first, cooke explains their message and their political, economic, and social demands expressed through creative works and initiatives since the beginning of the revolution up to this day. The blatant absence of solidarity has always caused us sadness and misery, and any voice that supports us has always been a source of joy.

-- Sana Yazigi, founder and editor-in-chief of The Creative Memory of the Syrian Revolution

miriam cooke has given us a gift: a remembrance of courage and hope in the face of great suffering and violence, and of the enduring resilience of the revolutionary desire for freedom. But just as importantly, she has demonstrated the complex relations of politics and culture in people's lives during the Syrian Revolution and civil war. Without the hubris that assumes art is politics, she shows us the many ways in which political struggle needs culture, and in which culture serves as the vital heart and soul of both hope and tragedy. -- Lawrence Grossberg, Distinguished Professor of Communication and Cultural Studies, UNC Chapel Hill

miriam cooke is one of the best writers and thinkers on Syria today. Her new book Dancing in Damascus documents the power of art and culture during a brutal conflict. Using tools as rudimentary as the spray can, pen and mobile recording device, Syria’s courageous and ingenious artists, writers and activists challenge Asad’s war machine and keep the spirit of the revolution alive. -- Malu Halasa, co-editor Syria Speaks: Art and Culture from the Frontline

An excellent and comprehensive analysis of the dramatic voices of "artist-activists" and others struggling to be heard through the Syrian revolution. miriam cooke penetratingly identifies reasons why the terrible events in Syria are leaving the world numb, or worse, indifferent, and what should be done to communicate the messages of the revolution effectively. -- Nikolaos van Dam, Ambassador of the Netherlands, Special Envoy for Syria, and author of The Struggle for Power in Syria.

is a well-conceived and well-documented book, easy to read, and provides an important insight into Syrian arts and culture in one of the most dangerous moments in Syria’s modern history. The author’s deep understanding of cultural dynamics in Syria and her personal contacts with Syrian intellectuals and arts curators offers her the possibility to write the first academic document on this topic. -- Ziad Majed, American University of Paris

I loved reading this book. On a personal level, it gave me hope and belief in the agency of ordinary Syrians subjected to regime violence. As an academic, it provided me with an unrivalled resource of different examples of cultural production in Syria, as well as different ways of interrogating them. The book responds to the urgent need to make visible the stories and lives of ordinary people who are often sidelined from the totalizing narratives that tend to ignore them. – Dina Matar, SOAS, University of London

is up-to-date and timely, and renews the interest in the 2011 Syrian revolution and its aftermath. The agency, creativity, and commitment of so many Syrian artists at home and abroad are analysed to show the impact of art on keeping the revolutionary momentum alive. The author insists on the just demands of the Syrian revolution in social justice and freedom, and demonstrates how Syrian artists are putting their lives at risk not only to resist the injustices of the present regime but also to expose it, critique it and constantly remind the outside world of its crimes. – Dalia Said Mostafa, The University of Manchester