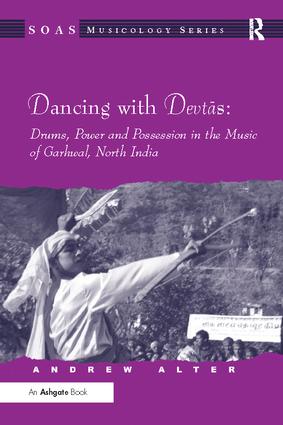 Dancing with Devtas: Drums, Power and Possession in the Music of Garhwal, North India

In the Central Himalayan region of Garhwal, the gods (devtas) enjoy dancing. Musicians - whether ritual specialists or musical specialists - are therefore an indispensable part of most entertainment and religious events. In shamanistic ceremonies, their incantations, songs and drumming 'make' the gods possess their mediums. In other contexts, such as dramatic theatrical renditions of stories of specific deities, actors 'dance' the role of their character having become possessed by the spirit of their character. Through the powerful sounds of their drumming, musicians cause the gods to dance. Music, and more particularly musical sound, is perceived in Garhwal as a powerful force. Andrew Alter examines music and musical practice in Garhwal from an analytical perspective that explores the nexus between musical sounds and performance events. He provides insight into performance practice, vocal techniques, notions of repertoire classification, instruments, ensembles, performance venues, and dance practice. However, music is not viewed simply as a system of organized sounds such as drum strokes, pitch iterations or repertoire items. Rather, in Garhwal, the music is viewed as a system of knowledge and as a system of beliefs in which meaning and spirituality become articulated through potent sound iterations. Alter makes a significant contribution to the discipline of ethnomusicology through a detailed documentation of musical practice in the context of ritual events. The book offers a traditionally thorough historical-ethnographic study of a region with the aim of integrating the local field-based case studies of musical practices within the broader Garhwali context. The work contains invaluable oral data, which has been carefully transliterated as well as translated. Alter blends a carefully detailed analysis of drumming in conjunction with the complex ritual and social contexts of this sophisticated and semantically rich musical practice.

’Andrew Alter’s fascinating book shows that music in Garhwal is more than just a system of organised sounds. Instead, it underpins a belief that Nada (’a pervading causal sound that animates the universe’) can be echoed on earth through the powerful practice of drumming. … Alter provides closequarter detail on musical practice in both secular and sacred contexts and close scrutiny of the copious musical examples, while a 60-minute companion CD illustrates the text and his revealing analysis to telling effect.’ Songlines 'The book’s strength lies mainly in richly describing a fragment of an extensive drumming tradition… Alter’s work draws attention to the role of percussion not merely as accompaniment, but more importantly as the defining feature of musical events that are critical in religious and life-cycle rituals… In keeping with other books of the SOAS musicology series, this volume is handsomely produced - a hardcover book with a tastefully designed dust jacket, ample photographs and musical notations, a CD.' Asian Ethnology

Contents: Introduction: Part 1 Contextualising the Study: Sounding the drum: power and meaning in the context of performance: Dev Bhumi: land of the gods; Caste groups and instrumentalists; Performance genres and dance practice; Musical instruments in Garhwal; Dhol Sagar: the ocean of drumming. Part 2 Analysis and Description of Musical Events: Musical Power in the Context of Performance: Drumming associated with PaÃ±davalila; Music in the context of wedding celebrations; The Pawara of Kirthipal and Kunjepal; Conclusion;; Appendices; Glossary of selected Garhwali and Hindi terms; Bibliography; Discography of selected commercially released tapes; Index.

Andrew Alter is Senior Lecturer in Music at the University of New England, Australia.