Darwinism, Democracy, and Race
American Anthropology and Evolutionary Biology in the Twentieth Century 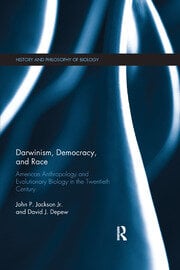 Darwinism, Democracy, and Race: American Anthropology and Evolutionary Biology in the Twentieth Century

Darwinism, Democracy, and Race examines the development and defence of an argument that arose at the boundary between anthropology and evolutionary biology in twentieth-century America. In its fully articulated form, this argument simultaneously discredited scientific racism and defended free human agency in Darwinian terms.

The volume is timely because it gives readers a key to assessing contemporary debates about the biology of race. By working across disciplinary lines, the book’s focal figures--the anthropologist Franz Boas, the cultural anthropologist Alfred Kroeber, the geneticist Theodosius Dobzhansky, and the physical anthropologist Sherwood Washburn--found increasingly persuasive ways of cutting between genetic determinist and social constructionist views of race by grounding Boas’s racially egalitarian, culturally relativistic, and democratically pluralistic ethic in a distinctive version of the genetic theory of natural selection. Collaborators in making and defending this argument included Ashley Montagu, Stephen Jay Gould, and Richard Lewontin.

Darwinism, Democracy, and Race will appeal to advanced undergraduates, graduate students, and academics interested in subjects including Philosophy, Critical Race Theory, Sociology of Race, History of Biology and Anthropology, and Rhetoric of Science.

Introduction: In the Footsteps of Franz Boas

Chapter II: Franz Boas and the Argument From Presumption

Chapter IV: Theodosius Dobzhansky and the Argument from Definition

Chapter V: Theodosius Dobzhansky and the Argument from Definition

Chapter VI: A Kairos Moment Unmet and Met: The Controversy Over Carlton Coon’s The Origin of Races

Epilogue: The Roots of the Sociobiology Controversy, the Infirmities of Evolutionary Psychology, and the Unity of Anthropology

John P. Jackson is a Lecturer in Interdisciplinary Studies, Charles Center for Academic Excellence, College of William and Mary, USA

is Emeritus Professor of Communication Studies and POROI (Project on the Rhetoric of Inquiry) at the University of Iowa, USA

Around the mid of the last century, evolutionary biology changed to become compatible with and even enable liberal-democratic and antiracist values. In their important book, Jackson and Depew recount the story of this crucial alliance. At a time of profound changes in both the political arena and the biological understanding of gene functioning and heredity, this alliance may look, in retrospect, more fragile and unstable than what we used to believe. Knowing deeply its contingent making and deep entanglement with wider anthropological and socio-political debates remains an essential tool to understand our present.

Science historians have long tended to stop at Darwin, and are only now beginning to open up the last century of the science of human evolution to critical historical analysis. In this literate and accessible new book, Jackson and Depew lead us through a marvelously intricate and intertwined intellectual history involving cultural anthropology, biological anthropology, population genetics, evolutionary biology, and racial studies. They scrupulously analyze the work of scholars like Alfred Kroeber, Ashley Montagu, Sherwood Washburn, and Theodosius Dobzhansky, and challenge the facile alt-histories that circulate in contemporary evolutionary psychology. This is an important addition to the library of anyone seriously interested in how we think about human origins and diversity.

Jonathan Marks, Professor of Anthropology at the University of North Carolina at Charlotte, USA

Jackson and Depew have produced an important work: a muscular refutation of scientific racism, grounded in science and deploying the tools of the historian. Through rich new readings of the work of five central geneticists and anthropologists, they show that inoculation with the Modern Synthesis of evolutionary biology immunized biological anthropology against racist genetic determinism, leading this group of scientists toward a more egalitarian human biology. Anyone sympathetic to the idea that racial superiority is "in the genes" needs to confront this book. And those of us who find ourselves repeatedly whacking the mole of racist science now have a solid new mallet.

I would suggest this book as a must-read for anyone interested in the concepts of race and identity, and in the contemporary discussions of genomics and society.

"...it is a must-read for every rhetorician of science, and it may well be the breakthrough volume our subdiscipline has long awaited. To have not read this book and to say anything of science, democracy, race, and human values in the twentieth and early twenty-first centuries or of the implications of Darwin and his successors for the liberal-democratic order is, henceforth, to be unacceptably uninformed."