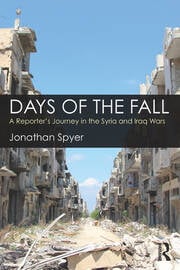 Days of the Fall: A Reporter’s Journey in the Syria and Iraq Wars

Days of the Fall takes the reader into the heart of the terrible wars in Syria and Iraq. The book combines frontline reporting with analysis of the deeper causes and effects of the conflict.

Over five years, Jonathan Spyer reported from the depths of the wars, spending time in Aleppo, Baghdad, Damascus, Mosul, Idlib, Hasaka and other frontline areas. He witnessed some of the most dramatic events of the conflict – the rescue of the trapped Yezidis from the attempted ISIS genocide in 2014, the Assad regime’s assault on Aleppo, the rise of independent Kurdish power in north east Syria, the emergence of the Shia militias in Iraq as a key force. The book depicts these events, and seeks to place them within a broader framework. The author notes the ethnic and sectarian faultlines in both Syria and Iraq, and contends that both countries have now effectively separated along these lines, leading to the emergence of de facto fragmentation and the birth of a number of new entities. The book also notes that this confused space has now become an arena for proxy conflict between regional and global powers.

Containing interviews with key figures from all sides of the conflict, such as the Shia militias in Iraq, and even ISIS members, Days of the Fall serves as an invaluable and comprehensive guide to the complex dynamics and the tragic human impact of the wars.

Jonathan Spyer is a journalist and researcher. He is originally from the UK and has lived in Jerusalem, Israel, since 1991. His research focuses on the Levant, and he has covered events in Syria extensively over the last decade.

"Spyer explores what is probably the most sensitive and complicated spot in the world, at least in the first two decades of the new century, namely, Syria and Iraq, both of which are engulfed in continuous turmoil and irreconcilable conflicts—an endless vertigo, if you will."

"Jonathan weaves his personal experiences with rebels, Islamists, militias, and even the Syrian government with his expertise on the region to present a compelling and fascinating narrative of the chaos in Iraq and Syria. If you want to understand why the future of the Middle East is bleak and Islamism is here to stay, this is the book you should read."

"If you read one book on the carnage in Syria-Iraq, make it this one. ​Jonathan Spyer's reporting ​stands out for its mix of deep knowledge, crisp prose, and personal witness. His courage, savvy, and insight have my admiration."

"An insightful and easy read that gives life to the paradoxical world of the Syrian uprising. Rich in vignettes of the conflict that has confounded leaders, policymakers and changed the face of the Middle East, Europe and the world beyond. A truly must read for laymen and experts alike."

"The unique selling point of Spyer’s book is the manner in which he bridges the think-tank and combat journalism worlds. Days of the Fall is informative and analytical, but remains highly readable and accessible. It is one of the best books I’ve read on the Arab Spring in Iraq and Syria, and I expect it to remain so for a long time to come."