De-Idealizing Relational Theory
A Critique From Within 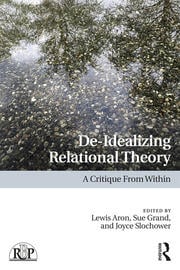 De-Idealizing Relational Theory: A Critique From Within

Self-examination and self-critique: for psychoanalytic patients, this is the conduit to growth. Yet within the field, psychoanalysts haven’t sufficiently utilized their own methodology or subjected their own preferred approaches to systematic and critical self-examination. Across theoretical divides, psychoanalytic writers and clinicians have too often responded to criticism with defensiveness rather than reflectivity.

attempts to rectify this for the relational field. This book is a first in the history of psychoanalysis; it takes internal dissension and difference seriously rather than defensively. Rather than saying that the other’s reading of relational theory is wrong, distorted, or a misrepresentation, this book is interested in querying how theory lends itself to such characterizations. How have psychoanalysts participated in conveying this portrayal to their critics? Might this dissension illuminate blind-spot(s) and highlight new areas of growth?

It's a challenge to engage in psychoanalytic self-critique. To do so requires that we move beyond our own assumptions and deeply held beliefs about what moves the treatment process and how we can best function within it. To step aside from ourselves, to question the assumed, to take the critiques of others seriously, demands more than an absence of defensiveness. It requires that we step into the shoes of the psychoanalytic Other and suspend not only our theories, but our emotional investment in them. There are a range of ways in which our authors took up that challenge. Some revisted the assumptions that underlay early relational thinking and expanded their sources (Greenberg & Aron). Some took up specific aspects of relational technique and unpacked their roots and evolution (Mark, Cooper). Some offered an expanded view of what constitutes relational theory and technique (Seligman, Corbett, Grossmark). Some more directly critiqued aspects of relational theory and technique (Berman, Stern). And some took on a broader critique of relational theory or technique (Layton, Slochower).

Unsurprisingly, no single essay examined the totality of relational thinking, its theoretical and clinical implications. This task would be herculean both practically and psychologically. We're all invested in aspects of what we think and what we do; at best, we examine some, but never all of our assumptions and ideas. We recognize, retrospectively, how very challenging a task this was; it asked writers to engage in what we might think of as a self-analysis of the countertransference. Taken together these essays represent a significant effort at self-critique and we are enormously proud of it.

Each chapter critically assesses and examines aspects of relational theory and technique, considers its current state and its relations to other psychoanalytic approaches. De-Idealizing Relational Theory will appeal to all relational psychoanalysts and psychoanalytic psychotherapists.

Lewis Aron, Ph.D., ABPP is the director of the New York University Postdoctoral Program in Psychotherapy and Psychoanalysis. He is the author and editor of numerous articles and books on psychotherapy and psychoanalysis and well known for his study and reading groups around the world. His most recent book, co-authored with Galit Atlas, is the Routledge title Dramatic Dialogue: Contemporary Clinical Practice.

is faculty at the NYU Postdoctoral Program in Psychotherapy and Psychoanalysis. She is the author of The Reproduction of Evil: A Clinical and Cultural Perspective and The Hero in the Mirror, and co-edited two books on the trans-generational transmission of trauma. She practices in NYC and in Teaneck, NJ.

is Professor Emerita at Hunter College and Graduate Center, the City University of New York. She is on the faculty of the New York University Postdoctoral Program, the Steven Mitchell Center, the National Training Program of NIP, the Philadelphia Center for Relational Studies, and the Psychoanalytic Institute of Northern California in San Francisco. She is the author of Holding and Psychoanalysis and Psychoanalytic Collisions. Second editions of both books were released in 2014. She is in private practice in New York City, where she sees individuals and couples, and runs supervision and study groups.

"Born as a vibrant and radical reaction to the perceived deficiencies and rigidities of classical theory, relational theory has now grown and matured to the point where it can begin to re-examine the biases inherent in the way it developed. In this unique book, some of the best relational minds engage in a self-examination of their theory, a loving self-critique designed to reveal both its limits and its potential. The book is a major contribution to our understanding of relational theory and it will be fascinating to psychoanalysts of all theoretical persuasions."-Sheldon Bach, Ph.D., Adjunct Clinical Professor, New York University Postdoctoral Program in Psychotherapy & Psychoanalysis

"In recent decades, relational psychoanalysis has become a prevailing international paradigm. With relational psychoanalysis reaching a maturational milestone, the Editors invited eminent Relationalists to engage in a creative, self-reflective, internal self-examination. This text offers a penetrating self-critique that goes both wide and deep. In it, many of the key thinkers in relational thinking look searchingly at relational theory's gaps, omissions, and weaknesses as well as its strengths. In so doing, relational thinking opens up to new ideas and goes well beyond defining itself vis-a-vis other approaches. Any student of the psychodynamic therapies will be enriched by the wisdom and scholarship that pervade this clinically valuable anthology."-Nancy McWilliams