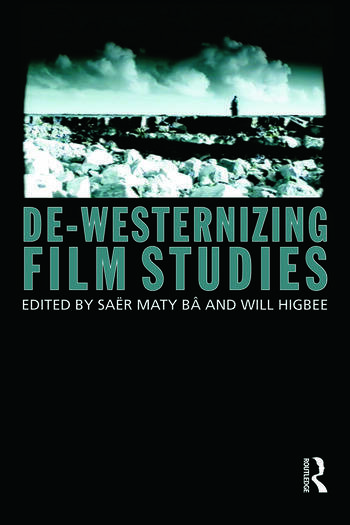 De-Westernizing Film Studies aims to consider what form a challenge to the enduring vision of film as a medium - and film studies as a discipline - modelled on ‘Western’ ideologies, theoretical and historical frameworks, critical perspectives as well as institutional and artistic practices, might take today. The book combines a range of scholarly writing with critical reflection from filmmakers, artists & industry professionals, comprising experience and knowledge from a wide range of geographical areas, film cultures and (trans-)national perspectives. In their own ways, the contributors to this volume problematize a binary mode of thinking that continues to promote an idea of ‘the West and the rest’ in relation to questions of production, distribution, reception and representation within an artistic medium (cinema) that, as part of contemporary moving image culture, is more globalized and diversified than at any time in its history. In so doing, De-Westernizing Film Studies complicates and/or re-thinks how local, national and regional film cultures ‘connect’ globally, seeking polycentric, multi-directional, non-essentialized alternatives to Eurocentric theoretical and historical perspectives found in film as both an artistic medium and an academic field of study.

The book combines a series of chapters considering a range of responses to the idea of 'de-westernizing' film studies with a series of in-depth interviews with filmmakers, scholars and critics.

Saër Maty Bâ is a temporary Lecturer Film Studies at Bangor University. Prior to joining Bangor, he had held fellowships at the universities of St Andrews, East London and Porstmouth. His research blurs boundaries between diaspora, film, media, and cultural studies. His articles, and book and film reviews have appeared in the journals Film International, Transnational Cinemas, Studies in Documentary Film Senses in Cinema, and Cultural Studies Review. He is co-editor with Will Higbee of the Journal of Media Practice/Special Issue: Re-presenting diaspora in cinema and new (digital) media (2010). Bâ is an associate editor, translator, contributor and editorial board member within The Encyclopedia of Global Human Migration project (2012).

Will Higbee is a Senior Lecturer in Film Studies at the University of Exeter. He is the author of Matthieu Kassovitz (2007) and the co-editor with Sarah Leahy of Studies in French Cinema: UK Perspectives 1985-2010 (2010) and with Saër Maty Bâ of a special edition of the Journal of Media Practice: ‘Re-presenting Diaspora in Cinema and New (Digital) Media’. He is a member of the editorial board of the journal Studies in French Cinema and has published various articles on contemporary French cinema, cinemas of the North African diaspora in France and questions of transnational cinemas in journals such as Transnational Cinemas, French Cultural Studies and Africultures. He is currently completing a monograph entitled Post-beur cinema: Maghrebi-French and North African émigré filmmaking in France since 2000.

'Highly Recommended. Documenting the continuing struggle between Western ideological dominance and alternative international filmmaking, Bâ and Higbee collect the work of a wide range of critical theorists, filmmakers, and scholars, who document the need for an alternative to conventional cinema history--a history that marginalizes much of the world's population, and the films produced outside the US and western Europe. Featuring some of the leading voices of transnational cinema, including Daniel Lindvall, Olivier Barlet, Coco Fusco, Kuljit Bhamra, Mohammed Bakrim, and many others, this collection effectively delineates the stranglehold of the Hollywood cinema on the West's collective consciousness.' –CHOICE, W. W. Dixon, University of Nebraska-Lincoln