Death, Dying and the Ending of Life, Volumes I and II 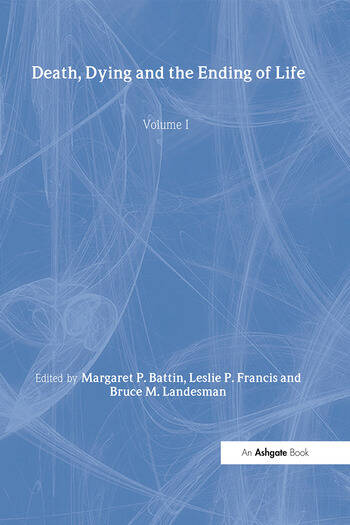 Death, Dying and the Ending of Life, Volumes I and II

The two volumes of Death, Dying, and the Ending of Life present the core of recent philosophical work on end-of-life issues. Volume I examines issues in death and consent: the nature of death, brain death and the uses of the dead and decision-making at the end of life, including the use of advance directives and decision-making about the continuation, discontinuation, or futility of treatment for competent and incompetent patients and children. Volume II, on justice and hastening death, examines whether there is a difference between killing and letting die, issues about physician-assisted suicide and euthanasia and questions about distributive justice and decisions about life and death.

Contents: Volume I: Series preface; Introduction: death and consent; Part I Death: The Nature of Death: On defining a 'natural death', Daniel Callahan; Why is death bad?, Anthony L. Brueckner and John Martin Fischer; Some puzzles about the evil of death, Fred Feldman; Brain Death and the Uses of the Dead: Brain death and personal identity, Michael B. Green and Daniel Wikler; Brain death: a durable consensus?, Daniel Wikler; The dead donor rule: should we stretch it, bend it, or abandon it?, Robert M. Arnold and Stuart J Youngner; Some must die, Stuart J. Youngner. Part II Decision-Making at the End of Life: Competent Patients: Medical paternalism, Allen Buchanan; Arrogance, Franz J. Inglefinger; Depression, competence and the right to refuse life-saving medical treatment, Mark D. Sullivan and Stuart J. Youngner; Advance Directives: Do-not-resuscitate orders: no longer secret but still a problem, Stuart J. Youngner ; Advance directives and the personal identity problem, Allen Buchanan; Why I don't have a living will, Joanne Lynn; Incompetent Patients: Deciding for others, Alan Buchanan and Dan Brock; The severely demented, minimally functional patient: an ethical analysis, John D. Arras; Terminating life-sustaining treatment of the demented, Daniel Callahan; Quality of life and non-treatment decisions for incompetent patients: a critique of the orthodox approach, Rebecca S. Dresser and John A. Robertson; Continued treatment of the fatally ill for the benefit of others, Mark Yarborough; The problem of proxies with interests of their own: toward a better theory of proxy decisions, John Hardwig; Courts, gender and 'the right to die', Steven H. Miles and Allison August; Children: Moral and ethical dilemmas in the special-care nursery, Raymond S. Duff and A.G.M. Campbell; Involuntary euthanasia of defective newborns: a legal analysis, John A. Robertson; Toward an ethic of ambiguity, John D. Arras; Futility: Judging medical futility: an ethical analysis of medical power an

'The difficult task to present an excellent, interdisciplinary and balanced choice of [such] articles covering the most important fields in relation to the main subjects has been perfectly solved by the editors... the most valuable and recommendable research tool...' Medicine, Health Care and Philosophy