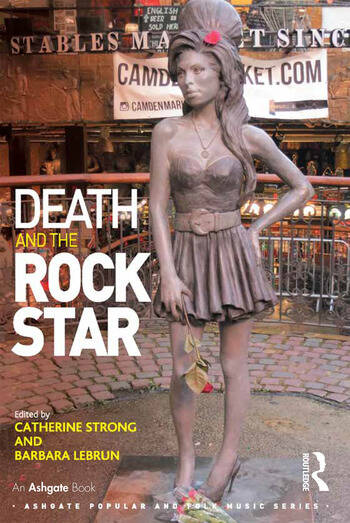 The untimely deaths of Amy Winehouse (2011) and Whitney Houston (2012), and the ’resurrection’ of Tupac Shakur for a performance at the Coachella music festival in April 2012, have focused the media spotlight on the relationship between popular music, fame and death. If the phrase ’sex, drugs and rock’n’roll’ ever qualified a lifestyle, it has left many casualties in its wake, and with the ranks of dead musicians growing over time, so the types of death involved and the reactions to them have diversified. Conversely, as many artists who fronted the rock’n’roll revolution of the 1950s and 1960s continue to age, the idea of dying young and leaving a beautiful corpse (which gave rise, for instance, to the myth of the ’27 Club’) no longer carries the same resonance that it once might have done. This edited collection explores the reception of dead rock stars, ’rock’ being taken in the widest sense as the artists discussed belong to the genres of rock’n’roll (Elvis Presley), disco (Donna Summer), pop and pop-rock (Michael Jackson, Whitney Houston, Amy Winehouse), punk and post-punk (GG Allin, Ian Curtis), rap (Tupac Shakur), folk (the Dutchman André Hazes) and ’world’ music (Fela Kuti). When music artists die, their fellow musicians, producers, fans and the media react differently, and this book brings together their intertwining modalities of reception. The commercial impact of death on record sales, copyrights, and print media is considered, and the different justifications by living artists for being involved with the dead, through covers, sampling and tributes. The cultural representation of dead singers is investigated through obituaries, biographies and biopics, observing that posthumous fame provides coping mechanisms for fans, and consumers of popular culture more generally, to deal with the knowledge of their own mortality. Examining the contrasting ways in which male and female dead singers are portrayed in the media, the book

Catherine Strong lectures in the Music Industry Program at RMIT University, Melbourne, Australia. She is the author of Grunge: Music and Memory (Ashgate, 2011), and Chair of IASPM Australia-New Zealand branch. Her research focuses on memory, heritage and gender in relation to popular music. Barbara Lebrun is Senior Lecturer in French Studies at the University of Manchester, UK. Her first book, Protest Music in France (Ashgate, 2009), won the 2011 IASPM prize for Best Anglophone Monograph, and she is the editor of Chanson et Performance (2012).