Death by Government
Genocide and Mass Murder Since 1900 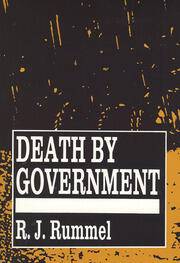 Death by Government: Genocide and Mass Murder Since 1900

This is R. J. Rummel's fourth book in a series devoted to genocide and government mass murder, or what he calls democide. He presents the primary results, in tables and figures, as well as a historical sketch of the major cases of democide, those in which one million or more people were killed by a regime. In Death by Government, Rummel does not aim to describe democide itself, but to determine its nature and scope in order to test the theory that democracies are inherently nonviolent.

Rummel discusses genocide in China, Nazi Germany, Japan, Cambodia, Turkey, Yugoslavia, Poland, the Soviet Union, and Pakistan. He also writes about areas of suspected genocide: North Korea, Mexico, and feudal Russia. His results clearly and decisively show that democracies commit less democide than other regimes. The underlying principle is that the less freedom people have, the greater the violence; the more freedom, the less the violence. Thus, as Rummel says, "The problem is power. The solution is democracy. The course of action is to foster freedom."

Death by Government is a compelling look at the horrors that occur in modern societies. It depicts how democide has been very much a part of human history. Among other examples, the book includes the massacre of Europeans during the Thirty Years' War, the relatively unknown genocide of the French Revolution, and the slaughtering of American Indians by colonists in the New World. This riveting account is an essential tool for historians, political scientists, and scholars interested in the study of genocide.