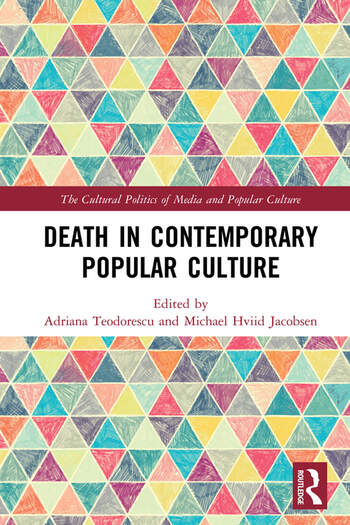 With intense and violent portrayals of death becoming ever more common on television and in cinema and the growth of death-centric movies, series, texts, songs, and video clips attracting a wide and enthusiastic global reception, we might well ask whether death has ceased to be a taboo. What makes thanatic themes so desirable in popular culture? Do representations of the macabre and gore perpetuate or sublimate violent desires? Has contemporary popular culture removed our unease with death? Can social media help us cope with our mortality, or can music and art present death as an aesthetic phenomenon? This volume adopts an interdisciplinary approach to the discussion of the social, cultural, aesthetic, and theoretical aspects of the ways in which popular culture understands, represents, and manages death, bringing together contributions from around the world focused on television, cinema, popular literature, social media and the internet, art, music, and advertising.

Introduction: death as a topic in contemporary popular culture

Part 1 Collective attitudes towards and responses to death and mortality

1 Thoughts for the times on the death taboo: trivialization, tivolization, and re-domestication in the age of spectacular death

2 ‘A stark and lonely death’: representations of dying alone in popular culture

3 Celebrity deaths and the thanatological imagination

4 The penguin and the wahine: shipwrecks, resilience, and popular culture

5 Healing comes from paradise: illness, cures, and the staving off of death in naturist remedies advertising

6 The aesthetics of corpses in popular culture

7 Into the dark side of pop art: from Warhol to Banksy

8 Towards a cultural theory of killing: the event of killing in Quentin Tarantino’s movies

is Professor of Sociology at Aalborg University, Denmark. He is the editor of The Poetics of Crime and Postmortal Society and co-editor of The Sociology of Zygmunt Bauman, Encountering the Everyday, The Transformation of Modernity, Utopia: Social Theory and the Future, Liquid Criminology , Emotions and Crime: Towards a Criminology of the Emotions, Exploring Grief: Towards a Sociology of Sorrow, and Imaginative Methodologies: The Poetic Imagination in the Social Sciences.