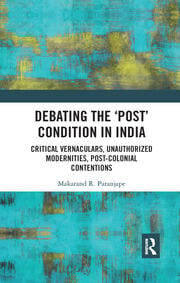 How was the post-modernist project contested, subverted and assimilated in India? This book offers a personal account and an intellectual history of its reception and response. Tracing independent India’s engagement with Western critical theory, Paranjape outlines both its past and ‘post’. The book explores the discursive trajectories of post-modernism, post-colonialism, post-Marxism, post-nationalism, post-feminism, post-secularism — the relations that mediate them — as well as interprets, in the light of these discussions, core tenets of Indian philosophical thought. Paranjape argues that India’s response to the modernist project is neither submission, willing or reluctant, nor repudiation, intentional or forced; rather India’s ‘modernity’ is ‘unauthorized’, different, subversive, alter-native and alter-modern.

The book makes the case for a new integrative hermeneutics, the idea of the indigenous ‘critical vernacular’, and presents a radical shift in the understanding of svaraj (beyond decolonisation and nationalism) to express transformations at both personal and political levels.

Makarand R. Paranjape is Professor of English at the Centre for English Studies, Jawaharlal Nehru University, New Delhi, India. He was the inaugural Eric Auerbach Visiting Chair in Global Literary Studies at the University of Tubingen, Germany, and served as the first ICCR Chair in Indian Studies at the National University of Singapore. His latest works include Cultural Politics in Modern India (2016) and The Death and Afterlife of Mahatma Gandhi (2015).

‘In his unique self-reflective style, Paranjape engages vast peripheries and marshals a dazzling array of thinkers and creative artists in attempting to describe alternative modernities shaped from India's revaluation of her own cultural imaginaries. In doing so, he offers new and important perspectives on the meaning of decolonization.’

‘To write about the "post" condition in India as a theoretical problematic requires a writer who comes to the subject matter with a mastery of both Indian and Western traditions. Paranjape is among only a handful of scholars of world literature and theory who has that mastery. This book, written with a superb understanding of critical and cultural theory, challenges generalist (both "grand" and "minor") accounts of the "post" condition in India by grounding texts in the real, material conditions of Indian history. It is a path-breaking and challenging study which will become a touchstone for any future work on Indian reflections on tradition and modernity.’