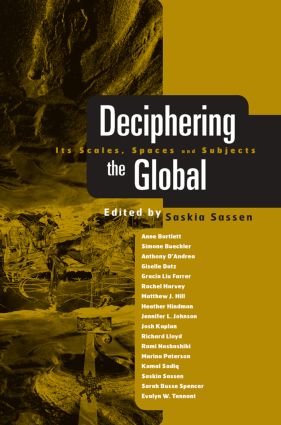 "Globalization is not just about changing relations between the ‘inside’ of the nation-state and the ‘outside’ of the international system. It cuts across received categories, creating myriad multilayered intersections, overlapping playing fields, and actors skilled at working across these boundaries. People are at once rooted and rootless, local producers and global consumers, threatened in their identities yet continually remaking those identities. Deciphering the Global analyzes such complex worlds, looking not merely at ‘glocalization’ or ‘transnationalization’ but at the global macrocosm within the human—social, economic and political—microcosm."

"A rich collection of studies that surfaces the dynamic articulation of the global and the national. This book is an exciting expedition that establishes new theoretical and methodological beachheads in the study of globalization."

—Walden Bello, author of Deglobalization and 2003 recipient of the Right Livelihood Award

"Sassen’s edited collection is a rich potpourri of highly readable, theoretically sophisticated and empirically fascinating accounts of partial processes and experiences of globalization."

—Roger Keil, Director, The City Institute at York University and co-editor of The Global Cities Reader

Part One: Microspaces in Global Scalings

Deciphering the Space and Scale of Global Nomadism: Subjectivity and Counterculture in a Global Age

Outsourcing Difference: Expatriate Training and the Disciplining of Culture

Part Three: Shifting Spaces and Subjects of the Political

The City and the Self: The Emergence of New Political Subjects in London

Illegal Immigrants as Citizens in Malaysia