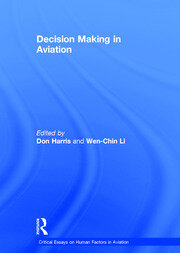 Decision making pervades every aspect of life: people make hundreds of decisions every day. The vast majority of these are trivial and without a right or wrong answer. In some respects there is also nothing extraordinary about pilot decision making. It is only the setting that is different - the underlying cognitive processes are just the same. However, it is the context and the consequences of a poor decision which serve to differentiate aeronautical decision making. Decisions on the flight deck are often made with incomplete information and while under time pressure. The implications for inadequate performance is much more serious than in many other professions. Poor decisions are implicated in over half of all aviation accidents. This volume contains key papers published over the last 25 years providing an overview of the major paradigms by which aeronautical decision making has been investigated. Furthermore, decision making does not occur in isolation. It is a joint function of the flight tasks; knowledge; equipment on the flight deck and other stressors. In this volume of collected papers, works from leading authors in the field consider all these aspects of aeronautical decision making.

Don Harris is Professor of Human Factors at Coventry University, UK and Wen-Chin Li is Senior Lecturer in the Department of Air Transport at Cranfield University, UK.