Decisions
A Call to Action 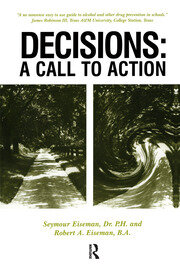 Decisions: A Call to Action

This book represents a method by which students are assisted to make wise decisions about the use of alcohol and other drugs. Situations which are essential to effective daily living are employed to reach effective decisions. The role of parents in assisting the children toward a better understanding of the nature of drug use is also explored. Specifically, the use of alcohol and other drugs in the workplace places the drug situation directly in the light of the job market. The current problem of HIV and drugs is also discussed, along with drugs and pregnancy.

Preface: Be Cool-Don't Do Drugs
A prize-winning essay written by a fifth-grade elementary school student in Palmdale, California. His decision not to use drugs is expressed in his essay.

Rand Drug Policy
Recognition of the national drug problem as expressed by the Rand Drug Policy Research Center,  June 1955, this report provides support for the need for wise decisions by students.

Chapter 1 For the Instructor: A Case Situation Approach to Textbook Development
Utilizing a minimum-content approach the student is less constrained to memorization and to evaluate the situation in order to promote wise decisions. The teacher is in a favorable position of teaching on a personal level.

Chapter 2  Introduction-You Decide
Individual differences require an understanding of adolescent needs in making decisions about use of drugs—licit and illicit. The basic aspect involves an understanding of what it means to be different and yet the same.

Chapter 3  Decisions About Drug Use
It is well known that a high risk group is the adolescent population. It is a time of experimentation—satisfaction of specific needs. There are three different models to describe reasons for drug use: the Disease Model, the Environmental Model, and the Addictive Model.

Chapter 4  Legalization/Decriminalization
The debate about approaches to the status of drugs in the United States involves two major points: Should drugs be legalized to assist in the reduction of crime, or not? It is not an easy issue to resolve.

Chapter 5  Drugs and the Law
The legal aspects of drug prohibition and control have a varied history. Drug laws are questionable since they have not been effective in controlling the growth, development, manufacturing, and distribution of illicit drugs.

Chapter 6  Prevention
We have yet to determine what it is that we want to prevent. Once prevention objectives have been determined, we are on the way. Levels of prevention have been studied. The Health Belief Model offers a solid base from which to start.

Chapter 7  Approaches to Counseling
Each person possesses five levels which can be coordinated into a meaningful basis for appropriate and wise decisions about drug use.

Chapter 8  Parents and Drugs
Parents are the most valuable source for influencing their child(ren) away from using drugs. Open and honest discussion about drugs can affect a positive influence.

Chapter 10  Alcohol
The use of alcohol dates back thousands of years. The effects of beverage alcohol on behavior are varied according to culture practices. Alcohol is no respector of age, sex group, or socioeconomic status.

Chapter 11  Drugs and Pregnancy
Drugs have the ability to pass through the placenta to affect the health of the fetus. The degree of reproductive risk depends on many factors; including which drug and dosage are being used.

Chapter 13  Barbiturates/Uses and Abuses
Barbiturates can be used for good and bad intentions.  They are widely used and highly effective as a sedative/hypnotic. Barbiturates are the most commonly-found drugs in the blood of patients who have committed suicide.

Chapter 14  Cocaine/Crack
Cocaine and crack are powerfully addicting stimulant drugs. They can kill. As one continues using, the price increases as does the potential risk to one's health.

Chapter 15  Heroin
The substance made from opium poppy is known as opiate or in this case, heroin. There are an estimated 300,000 to 800,000 heroin abusers. The numbers are likely to grow larger.

Chapter 16  Marihuana
The controversy about the use or non-use of marihuana continues to plague people today. Decisions are made in the context of "yes" or "no"—no in-betweens.

Chapter 17  What About Smoking?
Nicotine is a mood-controlling substance with a worldwide popularity slightly less than alcohol. Anti-smoking forces have mounted non-smoking campaigns.

Chapter 18  Drug Use and HIV/AIDS
One of the most dangerous problems attendant on drug abuse is shared or dirty needles. Needles can inject the HIV virus that can cause AIDS. HIV is the organism causing the disease AIDS.

Chapter 19  Drugs and Sports
History indicates that long ago athletes sought a competitive edge by using substances to improve athletic performance. Anabolic aids may be a source of physical harm to the athlete. One should be careful.

References for Teachers
This complete collection of reference material is designed to enhance the learning process.