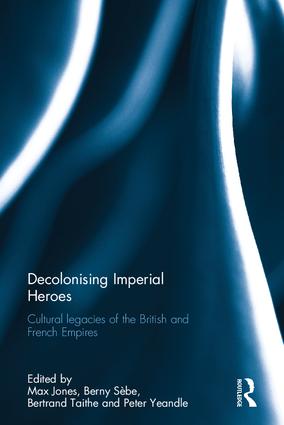 Cultural legacies of the British and French Empires, 1st Edition

The heroes of the British and French empires stood at the vanguard of the vibrant cultures of imperialism that emerged in Europe in the second-half of the nineteenth century. Their stories are well known. Scholars have tended to assume that figures such as Livingstone and Gordon, or Marchand and Brazza, vanished rapidly at the end of empire.

Yet imperial heroes did not disappear after 1945, as British and French flags were lowered around the world. On the contrary, their reputations underwent a variety of metamorphoses in both the former metropoles and the former colonies. This book develops a framework to understand the complex legacies of decolonisation, both political and cultural, through the case study of imperial heroes. We demonstrate that the ‘decolonisation’ of imperial heroes was a much more complex and protracted process than the political retreat from empire, and that it is still an ongoing phenomenon, even half a century after the world has ceased to be ‘painted in red’.

Whilst Decolonising Imperial Heroes explores the appeal of the explorers, humanitarians and missionaries whose stories could be told without reference to violence against colonized peoples, it also analyses the persistence of imperial heroes as sites of political dispute in the former metropoles. Demonstrating that the work of remembrance was increasingly carried out by diverse, fragmented groups of non-state actors, in a process we call ‘the privatisation of heroes’, the book reveals the surprising rejuvenation of imperial heroes in former colonies, both in nation-building narratives and as heritage sites. This book was originally published as a special issue of the Journal of Imperial and Commonwealth History.

2. ‘The Truth about Captain Scott’: The Last Place on Earth, Debunking, Sexuality and Decline in the 1980s Max Jones

3. ‘Heroes into Zeroes’? The Politics of (Not) Teaching England’s Imperial Past Peter Yeandle

4. ‘Heroes of Charity?’ Between Memory and Hagiography: Colonial Medical Heroes in the Era of Decolonisation Bertrand Taithe and Katherine Davis

Max Jones is Senior Lecturer in Modern History at the University of Manchester, UK. His previous publications include The Last Great Quest: Captain Scott’s Antarctic Sacrifice (2003) and his Oxford World’s Classics edition of Captain Scott’s last Journals (2005). He has lectured on heroes to public audiences all over Britain, and in Australia, Ireland, Italy, the USA and Switzerland. He is currently working on a study of changing attitudes to heroes over the last three centuries.

is Senior Lecturer in Colonial and Postcolonial Studies at the University of Birmingham, UK. He is the author of Heroic Imperialists in Africa: The promotion of British and French colonial heroes, 1870-1939 (2013) and the co-editor of Echoes of Empires: Identity, Memory and Colonial Legacies (2014).Since 2012, he has led the AHRC-funded project ‘Outposts of Conquest: the history and legacy of the fortresses of the Steppe and the Sahara in comparative perspective (1840s to the present day)’.

is Professor in Cultural History at the University of Manchester, UK. He founded and directs the Humanitarian and Conflict Response Institute, and is a member of Medicins Sans Frontieres’ CRASH scientific committee. His research is primarily devoted to the history of medicine, war and humanitarian aid in Britain and France, on which he has published widely. He is currently completing a monograph entitled Selling Compassion, with Julie-Marie Strange and Sarah Roddy.

is Lecturer in Modern History at the University of Loughborough, UK. He is the author of several essays on the teaching of history, as well as the monograph Citizenship, Nation, Empire: the politics of history teaching in England, c. 1870-1930 (2015). His current project focuses on Victorian performance and exhibition culture, and includes the study of theatre, zoos, circuses and museums.