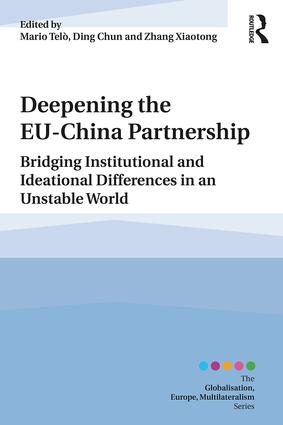 The China-EC/EU relationship, started in 1975, is a highly institutionalized, multidimensional and complex, but to some extent controversial international partnership. It is also challenged within the current unstable world.

This book addresses the convergences and the differences (ideational, political, institutional and interests-related) between China and the EU by a collective interaction between Chinese and European scholars. Among other things the book assesses sectoral bilateral dialogue and focuses on the interplay between internal complexity and external policies, discusses ideational divergences in international law and rule of law and in many relevant policy fields. Furthermore, it compares sustainable growth policies; explores trade and investment controversies and negotiations, human rights dialogue; and addresses environment and climate change policies.

This text will be of key interest to EU studies and politics, China studies and more broadly to area/Asian studies and international relations/global governance.

‘With contributions from both Chinese and European scholars on a wide range of issues and debates, this collection provides a truly comprehensive account of a set of interactions that have salience and importance way beyond the confines of the bilateral relationship itself. This collective volume, edited by Chun, Zhang and Telò is highly recommended for master students, scholars and informed citizens.’ - Shaun Breslin, University of Warwick, UK, Co-Editor of The Pacific Review.

‘The issue-areas covered across the different chapters of this book are highly salient in contemporary EU-China relations, and also within their respective domestic domains, and in International Relations scholarship more broadly. It is also positive to see inclusion of prominent scholars from both Europe and China as contributors to this volume; particularly the strong involvement of Chinese scholars. The book appears to be geared towards not just providing overviews of the ‘state of play’ in EU-China relations across various domains, but to advance scholarship with new empirical material and in-depth analysis.’ - Chen Zhimin, Dean of the International School and Vice-President Fudan University, Shanghai, China.

‘Our understanding of institutional and cultural foundations of the EU-China cooperation, the factors that determine its success and the obstacles that still persist are still not fully understood. It is one of the chief merits of this book that it represents a substantial academic progress in bridging this gap. This is achieved by way of an intensive cooperation between some of the finest senior and junior Chinese and European scholars in this relevant field of research in order to ameliorate the mutual understanding of the different perspectives and approaches of each side. This it in itself an exemplary academic innovation. The book is based on the neo-institutionalist approach which is one of the most fruitful methodologies in international politics. This reflects the high level of institutionalization of the EU-China partnership and the key condition of its progress. Both powers should be ready to play their role as stabilizing factors in a world order that seems to be on the way to become even more fragile.’ - Th Meyer, Technische Universitaet Dormund and Chef Redacteur of Neue Gesellscahft, Berlin, Germany.

‘This book reviews most of the subjects regarding the EU-China partnership and advocates some new areas for further cooperation which may strengthen the EU-China relations which are in a crucial period, partially due to the Tramp Administration in the United States. The EU and China would like to be global partners in the multilateral global system notably the Paris Treaty on climate change and its implementation. However, this book explores also old and new problems as well as new opportunities such as financial cooperation, research and academic cooperation, sustainable growth and competition polices, etc. This book provides balanced perspectives about the future developments of the two global actors by the contribution of well-known Chinese and European experts.’ - Xinning Song, Jean Monnet Chair ad personam at Renmin University, Beijing, and China Director, Brussels Academy for China and European Studies, Belgium.

Foreword [HE Yang Yanyi RPC Ambassador to the EU Brussels]

4. The EU-China Partnership: Institutionalization and the Limits of Liberal Logic [Andrew Cottey]

6. The China-EU Partnership: the Development and Role of Think Tanks [Silvia Menegazzi]

7.The EU, China and the WTO: Squaring the Irresistible Force Paradox of the MES Issue [Frédérik Ponjaert and Stéphanie Ghislain]

8. Seeking the Rule of Law as the Common Goal: EU-China Cooperation in Combating Commercial Bribery [Li Yuwen and Bian Chen]

11. Sustainable Growth in China and the EU: Competition or Cooperation? [J-C Defraigne]

12. Linkage Power: How the EU and China Managed Their Economic and Trade Relationship (1975–2016) [Zhang Xiaotong]

14. Strengths and Weaknesses of the Research and Academic Cooperation [Yuan Feng and Li Ying]

16. Climate Change and Target Implementation Strategies Before and After the C21 Paris Conference: Convergences and Divergences [Coraline Goron and Duncan Freeman]

Mario Telò is member of the Royal Academy of Sciences Brussels, and Professor of International relations at the ULB, Brussels, and LUISS, Rome, Italy.

Ding Chun is "Jean Monnet Chair", is Professor of Economics and Director of the Centre for European Studies, as well as Dutch Study Centre at Fudan University, Shanghai, China.

Zhang Xiaotong has a PhD in Political Science from ULB, is Associate Professor at the School of Political Science and Public Administration, and Director of the Economic Diplomacy Centre at Wuhan University, China.