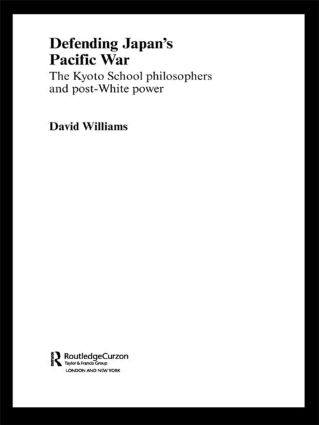 This book puts forward a revisionist view of Japanese wartime thinking. It seeks to explore why Japanese intellectuals, historians and philosophers of the time insisted that Japan had to turn its back on the West and attack the United States and the British Empire. Based on a close reading of the texts written by members of the highly influential Kyoto School, and revisiting the dialogue between the Kyoto School and the German philosopher Heidegger, it argues that the work of Kyoto thinkers cannot be dismissed as mere fascist propaganda, and that this work, in which race is a key theme, constitutes a reasoned case for a post-White world. The author also argues that this theme is increasingly relevant at present, as demographic changes are set to transform the political and social landscape of North America and Western Europe over the next fifty years.

'Defending Japan's Pacific War is a major achievement for which the author must be congratulated. A necessarily selective review cannot do full justice to it. Its deserves a wide readership beyond Japan studies.' - Kenn Nakata Steffensen, Department of Political and International Studies, SOAS, University of London.

'Williams's Pacific War revisionism, in the western liberal mode is uncompromising . He has offered no quarter and taken no prisoner's. His impassioned arguement for his case and his equally passionate attack on those he disagrees with may upset some, but even then it stimulates thought and critical self - reflection.'- Kenn Nakata Steffensen, Department of Political and International Studies, SOAS, University of London.

Prologue: The Final Sorrows of Empire - A Vietnam Elegy The Book in Brief Acknowledgments The Doomed Fleets Sail: The Pacific War for Beginners Japanese Usage and Style Part 1 Rise and Fall 1. Roman Questions: American Empire and the Kyoto School 2. Revisionism and the End of White America in Japan Studies Part 2 The Decay of Pacific War Orthodoxy 3. Philosophy and the Pacific War: Imperial Japan and the Making of a Post-White World 4. Scholarship or Propaganda: Neo-Marxism and the Decay of Pacific War Orthodoxy 5. Wartime Japan as It Really Was: The Kyoto School's Struggle against Tojo, 1941-44 Part 3 In Defence of the Kyoto School 6. Taking Kyoto Philosophy Seriously 7. Racism and the Black Legend of the Kyoto School: Translating Tanabe's The Logic of the Species 8. When Is a Philosopher a Moral Monster?: Tanabe versus Heidegger versus Marcuse Part 4 Nazism and the Crises of the Kyoto School 9. Heidegger, Nazism and the Farías Affair: The European Origins of the Kyoto School Crises 10. Heidegger and the Wartime Kyoto School: After Farías - The First Paradigm Crisis (1987-1996) 11. Nazism Is No Excuse: After Farías - The Allied Gaze and the Second Crisis (1997-2002) Part 5 After America, Philosophy 12. Nothing Shall Be Spared: A Manifesto on the Future of Japan Studies Translations of Two Texts by Hajime Tanabe 1. The Philosophy of Crisis or a Crisis in Philosophy: Reflections on Heidegger's Rectoral Address (1933) 2. On the Logic of Co-prosperity Spheres: Towards a Philosophy of Regional Blocs (1942) Select Bibliography

David Williams is one of Europe's leading thinkers about modern Japan. Born in Los Angeles, he was educated in Japan and at UCLA, and has contributed for many years to the opinion section of the Los Angeles Times. He has taught at Oxford, where he took his doctorate, Sheffield and Cardiff Universities. During twelve of his 25 years in Japan, he was an editorial writer for The Japan Times. He is the author of Japan: Beyond the End of History and Japan and the Enemies of Open Political Science.