Deficits and Debt in Industrialized Democracies 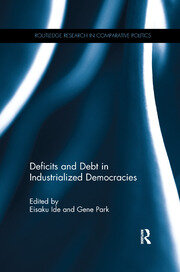 Deficits and Debt in Industrialized Democracies

Since the global financial crisis, government debt has soared globally by 40 percent and now exceeds an astonishing $100 trillion. Not all countries, though, have fared the same. Indeed, even prior to the financial crisis, the fiscal fates of countries have been diverging, despite predictions that pressures from economic globalization push countries toward more convergent fiscally conservative policies.

Featuring the work of an international interdisciplinary team of scholars, this volume explains patterns of fiscal performance (persistent patterns of budget deficits and government debt) from the 1970s to the present across seven countries – France, Italy, Germany, Japan, South Korea, Sweden, and the United States. Employing a comparative case study approach, seldom employed in studies of fiscal performance, contributions illuminate the complex causal factors often overlooked by quantitative studies and advances our theoretical understanding of fiscal performance. Among other things, the cases highlight the role of taxpayer consent, tax structure, the welfare state, organization of interests, and labor and financial markets in shaping fiscal outcomes.

A necessary resource to understand a broader array of factors that shape fiscal outcomes in specific national contexts, this book will reinvigorate the study of fiscal performance.

Gene Park is Associate Professor in the Department of Political Science at Loyola Marymount University. Dr. Park has researched and written extensively on the politics of public finance in Japan.

Eisaku Ide is Professor in the Department of Economics at Keio University. He is also affiliated with the Center for Risk Management and Safety Sciences at Yokohama National University. Dr. Ide is an expert on Japanese fiscal and financial policy.

"Why do societies vary in their tolerance for deficits and public debt? This groundbreaking book shows the power of deep historical expertise to illuminate a central issue of our times."—Isaac Martin, UC San Diego

"Deficits and Debt in Industrial Democracies provides a sweeping yet detailed exploration of the politics of debt in the postwar period. In some countries, supportive governmental institutions help political actors win taxpayer consent and resolve conflicting social interests; whereas in others, the struggle for fiscal consolidation seems futile. Gene Park, Eisaku Ide and their collaborators enlighten us about these national, long-term patterns of fiscal performance with their insightful comparative case studies of seven advanced economies. This impressive work is highly relevant to anyone concerned about the future of advanced industrial democracies in a debt-ridden world."—Cathie Jo Martin, Boston University