After preliminaries on nonlinear evolution equations governed by dissipative operators, the book gives a thorough study of the existence, uniqueness, and asymptotic behavior of global bounded solutions for differential equations with delay and local initial conditions. It then focuses on two important nonlocal cases: autonomous and quasi-autonomous. The authors next discuss sufficient conditions for the existence of almost periodic solutions, describe evolution systems with delay and nonlocal initial conditions, examine delay evolution inclusions, and extend some results to the multivalued case of reaction-diffusion systems. The book concludes with results on viability for nonlocal evolution inclusions.


The quasi-autonomous case with f and g Lipschitz
Proofs of Theorems 4.1.1, 4.1.2
Nonlinear diffusion with nonlocal initial conditions
Continuity with respect to the data
The case f continuous and g Lipschitz
An example involving the p-Laplacian
The case f Lipschitz and g continuous
The case A linear, f compact, and g nonexpansive
The case f Lipschitz and compact, g continuous
The damped wave equation revisited
Further investigations in the case ℓ = ω
The nonlinear diffusion equation revisited
Bibliographical notes and comments


Almost periodic functions
The main results
Auxiliary lemmas
Proof of Theorem 5.2.1
The w-limit set
The transport equation in one dimension
An application to the damped wave equation
Bibliographical notes and comments


Single-valued perturbed systems
The main result
The idea of the proof
An auxiliary lemma
Proof of Theorem 6.2.1
Application to a reaction-diffusion system in L2(Ω)
Nonlocal initial conditions with linear growth
The idea of the proof
Auxiliary results
Proof of Theorem 6.7.1
A nonlinear reaction-diffusion system in L1(Ω)
Bibliographical notes and comments

Monica-Dana Burlică is an associate professor in the Department of Mathematics and Informatics at the “G. Asachi” Technical University of Iaşi. She received her doctorate in mathematics from the University “Al. I. Cuza” of Iaşi. Her research interests include differential inclusions, reaction-diffusion systems, viability theory, and nonlocal delay evolution equations.

Ioan I. Vrabie is a full professor in the Faculty of Mathematics at the University "Al. I. Cuza” of Iaşi and a part-time senior researcher at the "O. Mayer" Mathematical Institute of the Romanian Academy. He received his doctorate in mathematics from the University “Al. I. Cuza” of Iaşi. He has been a recipient of several honors, including The First Prize of the Balkan Mathematical Union and the “G. Ţiţeica” Prize of the Romanian Academy. His research interests include evolution equations, viability theory, and nonlocal delay evolution equations.

"This book will be useful to researchers and graduate students interested in delay evolution equations and inclusions subjected to nonlocal initial conditions." - Sotiris K. Ntouyas (Ioannina) 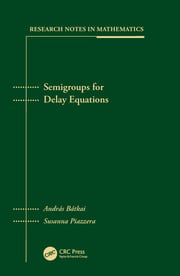