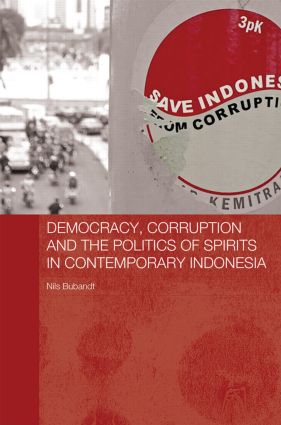 Democracy, Corruption and the Politics of Spirits in Contemporary Indonesia

Indonesia has been an electoral democracy for more than a decade, and yet the political landscape of the world’s third-largest democracy is as complex and enigmatic as ever. The country has achieved a successful transition to democracy and yet Indonesian democracy continues to be flawed, illiberal, and predatory.

This book suggests that this and other paradoxes of democracy in Indonesia often assume occult forms in the Indonesian political imagination, and that the spirit-like character of democracy and corruption traverses into the national media and the political elite. Through a series of biographical accounts of political entrepreneurs, all of whom employ spirits in various, but always highly contested, ways, the book seeks to provide a portrait of Indonesia’s contradictory democracy, contending that the contradictions that haunt democracy in Indonesia also infect democracy globally. Exploring the intimate ways in which the world of politics and the world of spirits are entangled, it argues that Indonesia’s seemingly peculiar problems with democracy and spirits in fact reflect a set of contradictions within democracy itself.

Engaging with recent attempts to look at contemporary politics through the lens of the occult, Democracy, Corruption and the Politics of Spirits in Contemporary Indonesia will be of interest to academics in the fields of Asian Studies, Anthropology and Political Science and relevant for the study of Indonesian politics and for debates about democracy in Asia and beyond.

"Nils Bubandt has hit upon an ingenious idea…The brilliance of this book stems from Bubandt’s realisation that studying these interconnections can transform our understandings of both politics and spirits. He has set an important agenda for future studies of Indonesian politics."

Nicholas Long, Assistant Professor of Anthropology at the London School of Economics and Political Science.

'This is a truly inspiring book, providing a fresh take on Indonesian politics and the anthropology of politics and religion. The text weaves together the spirit world with politics, corruption and the execution of law, without treating spirits as an epi-phenomenon of the latter but as a formative power.'

Chapter 1. The Kyai: Spirits and Corruption

Chapter 2. The Bloggers: Spirits, Embarrassment, and the Battle for Islam

Chapter 3. The Politician: Sorcery and Decentralization

Chapter 4. The Sultan: Elections, Ancestors, and the Law

Chapter 5. The Prophet: World Renewal and the Ghost of a President

Conclusion: Democracy from a Spirit Point of View

Nils Bubandt is Professor of Anthropology in the Department of Culture and Society at Aarhus University, Denmark. He has carried out ethnographic fieldwork on politics, witchcraft, and magic in Indonesia since 1991. Co-editor of Varieties of Secularism in Asia: Anthropological Explorations of Politics, Religion, and the Spiritual (2012) and of Experiments in Holism: Theory and Practice in Contemporary Anthropology (2011), his monograph entitled The Empty Sea Shell: Witchcraft and Doubt on an Indonesian Island is forthcoming.

The Modern Anthropology of Southeast Asia

The books in this series address issues in processes of development, globalisation and change in Southeast Asia. Where appropriate they contextualise change and local responses to it by providing ethnographic materials on social and cultural forms and institutions. Although all the contributors to the series examine modern and contemporary issues in the anthropology of Southeast Asia, the emphasis in each book differs as authors choose to concentrate on specific dimensions of change and globalisation or work out particular conceptual approaches to the complex issues of development. Areas of concern include: nation-building, power and the media; technological innovations in agriculture and rural-urban migration; the expansion of industrial and commercial employment; the rapid increase in cultural and ethnic tourism; the consequences of deforestation and environmental degradation; heritage and identity; contemporary expressions of religious affliliation; the 'modernisation of tradition'; ethnic identity and conflict; changing gender relations; and the religious transformation of society.