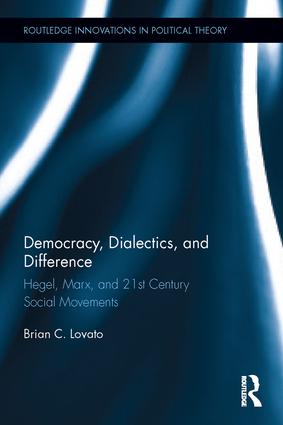 It has been nearly two centuries since Marx famously turned Hegel on his head in order to repurpose dialectics as a revolutionary way of thinking about the internal contradictions of our social relations. Despite critiques from post-structuralists, post-colonialists, and others, there has been a resurgence of dialectical thought among political theorists as of late. This resurgence has coincided with a rise in the mention of words like class warfare, socialism, and communism among the general public on the streets of Seattle in 1999, in Cairo’s Tahrir Square, in the actions of the Greek anarchists and the Spanish indignados, and in the rallying cry of "we are the 99%" of the Occupy Movement, and in academia. This book explores how it is that dialectical thought might respond to the critiques brought forth by those on the left who are critical of Marxism’s universalizing and authoritarian legacy.

Brian C. Lovato singles out Ernesto Laclau and Chantal Mouffe as the key interlocutors in this ongoing conversation between Marxism and post-structuralism. Laclau and Mouffe argue that Marxist theory is inherently authoritarian, cannot escape a class-reductionist theory of revolutionary subjectivity, and is bound by a closed Hegelian ontology. Lovato argues the opposite by turning to two heterodox Marxist thinkers, Raya Dunayevskaya and C. L. R. James, in order to construct a radically democratic, dynamic, and open conceptualization of dialectical thought. In doing so, he advances a vision of Marxist theory that might serve as a resource to scholars and activists committed not only to combatting capitalism, but also to fighting against colonialism, patriarchy, white supremacy, and heteronormativity. The writings of Dunayevskaya and James allow for Marxism to become relevant again in these tumultuous early years of the 21st century.

'Dialectical theories are back on the agenda, and in Democracy, Dialectics, and Difference, Lovato makes a significant contribution to the revitalization of a tradition that is not only dialectical, but also decolonial.' - George Ciccariello-Maher, Drexel University, USA

'For several decades now, the long shadow of Laclau and Mouffe have linked Marxism to authoritarianism and essentialism. Despite spirited rejections of this view, there remains a kind of orthodoxy based on their view that Marxism inevitably diminishes popular involvement and maximizes centralized authority structures as it is practiced. Brian Lovato challenges this view in his fresh and insightful take on the legacy of Marxism. He turns to several non canonical or even anti-canonical figures in doing so: Raya Dunayevskaya, C.L.R. James and Cornelius Castoriadis. Reading Dunayevskaya in particular as one who recognized an alternative and far more contingent and populist version of Marxism, Lovato shows that Lenin himself can be reread as anticipating and seeking an alternative form of Marxism that negates the kinds of critiques that Laclau and Moufffe will ascribe to it. This book will reenergize those who seek to turn to Marx (and Lenin too) insofar as it demonstrates that the baggage that is often associated with Marxism need not stem from Marx himself—and not always from the practices of marxism either—but rather comes from various discourses that presume a kind of fatal flaw in marxism that leftists must therefore avoid ever after.' - James Martel, San Francisco State University, USA

1. Introduction 2. Radical Democracy in the Marxist Tradition 3. Hegel as Revolutionary 4. New Forces of Resistance 5. Beyond the Politics of Difference

Brian C. Lovato is a political theorist and labor organizer currently based in California. His research draws on Marxist, classical anarchist, post-structuralist, and decolonial thought, in order to better understand social movements and the way they engage issues of race, class, and gender.