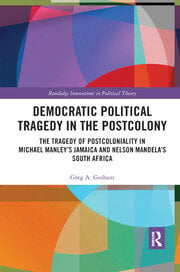 Democratic Political Tragedy in the Postcolony: The Tragedy of Postcoloniality in Michael Manley’s Jamaica and Nelson Mandela’s South Africa

A ground-breaking work in Africana political thought that links the plight of progressive political endeavors in Africa with those in the Diaspora and beyond, Democratic Tragedy in the Postcolony engages with two of the defining political sagas of the postcolonial era. The book presents Michael Manley of Jamaica and Nelson Mandela of South Africa as tragic political leaders at the helm of popular democratic projects that run aground in the face of the constraints that a subordinate position in the global economy presents for such endeavors. Jamaica’s experiment with democratic socialism as an alternative path to development at the height of the cold war is considered alongside post-Apartheid South Africa’s search for a development model consistent with the demand for civic empowerment and equitable distribution of social goods in the aftermath of Apartheid.

Democratic Political Tragedy in the Postcolony theorizes the defining tragic impasse and the telling vacillations by which the postcolonies in question are brought to the neoliberal catastrophes that currently prevail.

5. Mandela and The Tragedy of the Post-Apartheid state

6. The Aftermath of Tragedy: Patterson, Mbeki, and The Neoliberal Age (Postscript)

'In this tightly argued and fascinating study, Greg Graham seeks to explore and comprehend a certain narrative of disappointing outcomes and dreams deferred that has been the overwhelming pattern among newly independent countries of the South, or what Achille Mbembe appropriately terms the postcolony. Abandoning linear notions of progress which run counter to lived experiences, Graham instead draws significantly on left Hegelian dialectics, David Scott’s reflections and Frantz Fanon’s notion of national consciousness to center tragedy as a critical conceptual tool with which to grasp these histories. His interlocutors are Michael Manley of the period of Democratic Socialism in Jamaica (1972-1980) and Nelson Mandela and his leadership in post- Apartheid South Africa. Both Manley and Mandela are situated as charismatic leaders who played central roles in processes of popular uplift and national regeneration, but who ultimately failed to fulfill their promises. The concurrent triumph of neo-liberalism is seen as both the failure of these leaders to sustain policies built on democratic foundations of marronage and national consciousness, as well as the effect of powerful international forces arrayed against them. Greg Graham, however, doesn’t end his conversation at the moment of tragedy, but suggests that despite the overwhelming weight of the neo-liberal ascendancy, the experience of tragedy and its effects is, in dialectical fashion, a teaching moment, leading to fresh attempts at thinking through new projects based on freedom and democracy and scaling the parapets of seemingly unassailable power.' - Brian Meeks, Professor of Africana Studies, Brown University

'Greg Graham's Democratic Political Tragedy in the Postcolony is a brilliant and heartfelt attempt at theorizing, in terms of tragedy, the collapse of the epic aspirations of the mid-20th century anti-colonial movements as most were rolled over by the counter-revolutionary neoliberal strategies of global capitalism. It is a work that effectively poeticizes these historic struggles and historicizes their poetic foundations. A must read for postcolonial scholars and, particularly, those of Jamaica and South Africa.' - Paget Henry, Professor of Sociology and Africana Studies, Brown University

'A virtue of this remarkable book is that it actually offers a theory, grounded in rich historical evidence, through which to understand the now clichéd conclusion seemingly inevitable failure of former colonies of the global south. Provocatively creolizing the political thought of Hegel on tragedy through an examination of recent Africana political philosophical reflections on the same, Greg Graham materializes these ideas in this detailed study of two recent giants of resistance from the Caribbean and Southern Africa—Michael Manley and Nelson Mandela—who were ultimately constrained by neoliberal impositions, investments, and military force. The result is a powerfully written profound treatise not only of traditional political scientific concerns of leadership, power, and effective administrating but also of relationships between the ethical and the political, the meaning of political action, the shifting symbolic meaning of history, and notions of possibility and potential in social-political phenomena—in short, necessary thought as humanity unfortunately continues to struggle through proverbially interesting times.' - Lewis Gordon, Honorary President of the Global Center for Advanced Study and author of What Fanon Said: A Philosophical Study of His Life and Thought