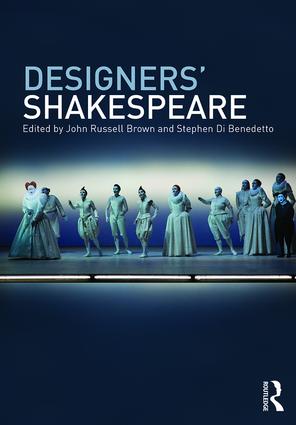 Theatre Design involves everything seen on stage: not only scenery but costumes, wigs, makeup, properties, lighting, sound, even the shape and material of the stage itself. Designers’ Shakespeare presents and analyses the work of a half-dozen leading practitioners of this specialist art. By focusing specifically on their Shakespearean work, it also offers a fresh, exciting perspective on some of the best-known drama of all time.

Shakespeare’s plays offer an unusual range of opportunities to designers. As they were written for a theatre which gave no opportunity for scenic support or embellishment, designers are freed from any compulsion to imitate original practices. This has resulted in the extraordinarily diverse range of works presented in this volume, which considers among others the work of Josef Svoboda, Karl-Ernst Herrmann, Ming Cho Lee, Alison Chitty, Robert Wilson, Societas Raffaello Sanzio, Filter Theatre, Catherine Zuber, John Bury , Christopher Morley, Ralph Koltai and Sean Kenny.

John Russell Brown directed plays in England, the USA and around the world. He was an Associate Director of the Royal National Theatre for fifteen years, and chaired the Drama Panel of the Arts Council of Great Britain. He authored numerous works on Shakespeare and contemporary theatre, including New Sites for Shakespeare (Routledge, 1999) and Shakespeare and the Theatrical Event (2002).

Stephen Di Benedetto is currently an Assistant Professor of Theatre History and Theory at the University of Miami. He is the Book Review Editor (North America), for Theatre Research International. Dr. Di Benedetto has held teaching positions at the University of Houston; the Drama Studies Centre; University College Dublin; National University of Ireland; and at DePaul University. He has contributed scholarly essays as part of The Senses in Performance: Taste, Touch, Smell, and Sound in the Theatre (Routledge, 2006); Patronage, Spectacle and the Stage (Prague Theatre Institute, 2006); Space and the Postmodern Stage (Prague Theatre Institute, 2000); and The Professions in Contemporary British Drama (Intellect Books, 2003).