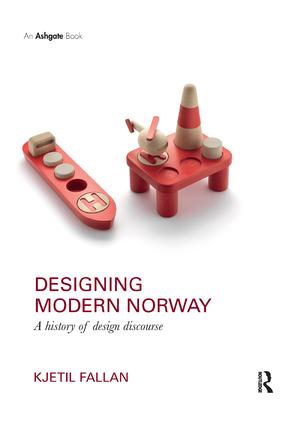 Designing Modern Norway: A History of Design Discourse is an intellectual history of design and its role in configuring the modern Norwegian nation state. Rather than a conventional national design history survey that focuses on designers and objects, this is an in-depth study of the ideologies, organizations, strategies and politics that combined might be said to have "designed" the modern nation's material and visual culture. The book analyses main tropes and threads in the design discourse generated around key institutions such as museums, organisations and magazines. Beginning with how British and continental design reform ideas were mediated in Norway and merged with a nationalist sentiment in the late nineteenth century, Designing Modern Norway traces the tireless and wide-ranging work undertaken by enthusiastic and highly committed design professionals throughout the twentieth century to simultaneously modernise the nation by design and to nationalise modern design. Bringing the discussion up towards the present, the book concludes with an examination of how Norway's new-found wealth has profoundly changed the production, mediation and consumption of design.

In Designing Modern Norway,Kjetil Fallan makes an invaluable addition to Scandinavian design literature by writing the first scholarly English language history of Norwegian design. He constructs a narrative animated by advocacy organizations and ideologically driven periodicals as well as individual designers and theorists, telling a rich and complex history of Norwegian design discourse from 1870 to 1970.

is an impeccable study. Fallan's expert and meticulous analysis interrogates the multiple institutions, journals, and magazines that gave rise to design discourses that directly impacted the construction of modern Norway. The felicitous result is a thoroughly de-mythologized history of design and national identity.

Michael Golec, The School of the Art Institute of Chicago

Here the contributions of individual designers emerge as part of a growing web of design organisations and institutions. This and the coverage of design discourse in professional and popular magazines creates a compelling picture of Norwegian design culture. A valuable history made up of many competing voices, rather than a single master narrative.

This is a rare full-size portrait of a national design culture by a most gifted draughtsman. Norway has the perfect scale to study the mesh of professionals, institutions, media and debates in detail - both as it developed in the frames of the nation state from 1870 to 1970, and as intricate ingredients of our current design scene. This will be a precious book to students and scholars of design culture, inviting valuable comparisons with other countries or cultures.

Chapter 4: Design on the Home Front

Chapter 7: Unravelling Utopia: The Demise of the Applied Art Movement

Chapter 8: Design with Care: From Consumer Activism to Environmentalism

Kjetil Fallan is Professor of Design History at the University of Oslo, Norway