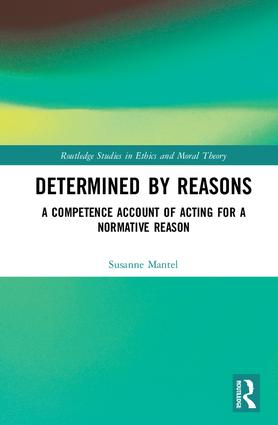 A Competence Account of Acting for a Normative Reason, 1st Edition

"A summary like this cannot give a proper impression of the subtlety of Mantel's reasoning, the wide knowledge of the literature she brings to bear on the issues, the lucid exposition, the careful, critical and considerate manner in which she proceeds . . . the book is a work of outstanding philosophical craft . . . technically highly competent, well informed and carefully thought through in every detail, [it] will be profitable to discuss for all those eager to understand action for reasons." --Notre Dame Philosophical Reviews

"Mantel offers a novel theory of what it is to act for a good reason and challenges some popular assumptions about the ontology of reasons . . . There is much to like about this book. Her discussion is packed with arguments. Her proposals are original and insightful. I think that her account of basing should shed light on a number of outstanding problems in epistemology, the philosophy of action, and ethical theory. I can recommend this unreservedly to anyone with interests in these areas." --Clayton Littlejohn in Mind

"Mantel’s account of acting for a normative reason is an insightful and welcome new addition to the literature and helpfully advances various distinct debates in normativity, moral psychology, and action theory." --Claire Field in Ethics

"Reading Susanne Mantel’s Determined by Reasons felt a lot like I imagine it would feel to have your hand held by an expert as they guide you through a minefield. Densely argued and highly original, her demolition of existing views of what it is to act for reasons is completely convincing, as are her arguments for her own normative competence account. This book is a must-read for philosophers of action and metaethicists alike." --Michael Smith, Princeton University, USA

"In this excellent monograph, Susanne Mantel provides us with a fascinating, novel account of what it is to act for a reason. According to Mantel, a special kind of normative competence is required for acting on reasons. The account of normative competence on offer is sophisticated. I found one of its key virtues to be that it offers to explain how we are able to respond to reasons in an unreflective, non-intellectual manner, as well as in a reflective, intellectual manner. I highly recommend this book to everyone interested in reasons." --Daniel Star, Boston University, USA

Susanne Mantel is an assistant at Saarland University. She works on metaethics, action theory, and epistemology with a focus on reasons and normativity. Her articles have been published in Erkenntnis, Pacific Philosophical Quarterly, Philosophical Explorations, and Synthese. She received the Wolfgang-Stegmüller-Preis and the Lauener Prize for Up and Coming Philosophers.