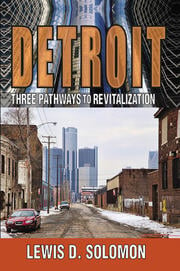 Solomon urges an economic development strategy, one anchored in Detroit balancing its municipal and public school district's budgets, improving the academic performance of its public schools, rebuilding its tax base, and looking to the private sector to create jobs. He advocates an overlapping, tripartite political economy, one that builds on the foundation of an appropriately sized public sector and a for-profit private sector, with the latter fueling economic growth. Although he acknowledges that Detroit faces a long road to implementation, Solomon sketches a vision of a revitalized economic sector based on two key assets: vacant land and an unskilled labor force.

The book is divided into four distinct parts. The first provides background and context, with a brief overview of the city's numerous challenges. The second examines Detroit's immediate efforts to overcome its fiscal crisis. It proposes ways Detroit can be put on the path to financial stability and sustainability. The third considers how Detroit can implement a new approach to job creation, one focused on the for-profit private sector, not the public sector. In the fourth and final part, Solomon argues that residents should pursue a strategy based on the actions of individuals and community groups rather than looking to large-scale projects.