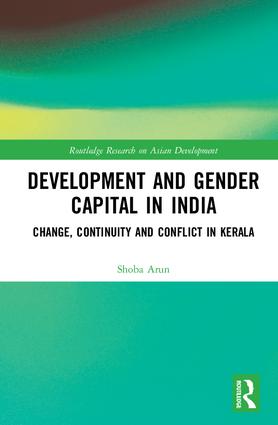 Development and Gender Capital in India

The Indian state of Kerala has invoked much attention within development and gender debates, specifically in relation to its female capital- an outcome of interrelated historical, cultural and social practices. On the one hand, Kerala has been romanticised, with its citizenry, particularly women, being free of social divisions and uplifted through educational well-being. On the other hand, its realism is stark, particularly in the light of recent social changes.

Using a Bourdieusian frame of analysis, Development and Gender Capital in India explores the forces of globalisation and how they are embedded within power structures. Through narratives of women’s lived experiences in the private and public domains, it highlights the ‘anomie of gender’ through complexities and contradictions vis-à-vis processes of modernity, development and globalisation. By demonstrating the limits placed upon gender capital by structures of patriarchy and domination, it argues that discussions about the empowered Malayalee women should move from a mere ‘politics of rhetoric and representation’ to a more embedded ‘politics of transformation’, meaningfully taking into account women’s changing roles and identities.

This book will be of interest to scholars and students of Development Studies, Gender Studies, Anthropology and Sociology.

Kerala has long been viewed as a model of development and particularly for its achievements in gender equality and women’s empowerment. In this important new book Shoba Arun challenges this simplistic narrative. By applying a Bourdieusian gender capital framework she reveals ways in which patriarchical social structures constrain women’s social and economic roles. Arun’s deep scholarship makes this essential reading for anyone seeking to understand how Kerala really works."

An extraordinary account about the interaction of development policy and the role of women. By constructing that role in terms of "gender capital," Shoba Arun gives us a different type of analysis. From all the negatives in women’s situation she succeeds in extracting a significant positive. This move brings women’s talents and hard work to the fore and should lead to changed policies.

This is an important book on the welfare of women in India, in particular Kerala, with particular reference to how global and social processes value and devalue forms of gender capital (such as migration, work, neoliberal practices) in local contexts. The rising levels of violence against women in Kerala lead Dr. Arun to reassess the structure of gender relations in a state which is often upheld as a model of social development. The readership of this thoughtful and provocative book would extend beyond feminist sociology into the areas of development and global studies.

2. Gender and Development: A Bourdieusian Framework

5. ICTs and Gender Capital at Work

8. Legitimate Capital and the Adivasi Deficit

Shoba Arun is a Senior Lecturer in the Department of Sociology at Manchester Metropolitan University, UK.