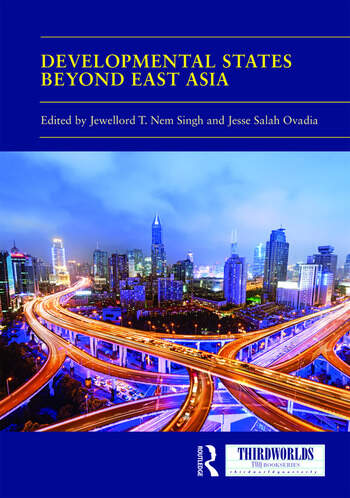 This comprehensive volume reviews recent scholarship regarding the role of the state in economic development. With a wide range of case studies of both successful and failed state-led development, the authors push the analysis of the developmental state beyond its original limitations and into the 21st century.

New policies, institutional configurations, and state-market relations are emerging outside of East Asia, as new developmental states move beyond the historical experience of East Asian development. The authors argue for the continued relevance of the ‘developmental state’ and for understanding globalization and structural transformation through the lens of this approach. They further this concept by applying it to analyses of China, Latin America, and Africa, as well as to new frontiers of state-led development in Japan and the East Asian developmental states. This book expands the scope of research on state-led development to encompass new theoretical and methodological innovations and new topics such as governance, institution building, industrial policy, and the role of extractive industries.

This book was originally published as a special issue of the journal Third World Quarterly.

1. Introduction: The theory and practice of building developmental states in the Global South Jewellord Nem Singh and Jesse Salah Ovadia

2. Studying the developmental state: theory and method in research on industrial policy and state-led development in Africa Jesse Salah Ovadia and Christina Wolf

3. State-owned enterprises and the political economy of state–state relations in the developing world Jewellord Nem Singh and Geoffrey C. Chen

4. The developmental state of the twenty-first century: accounting for state and society Jennifer Hsu

8. An extractive developmental state in Southern Africa? The cases of Zambia and Zimbabwe Richard Saunders and Alexander Caramento

Jewellord T. Nem Singh is Assistant Professor in International Relations at Leiden University, the Netherlands. He is the recipient of the Japan Society for Promotion of Science (JSPS) Research Award in 2016 and the Alexander von Humboldt Research Fellowship in 2017. His main research lies on the intersection between development and democracy in Latin America and East Asia, with particular interest on state-building and resource-led growth strategies. He is co-editor of Demanding Justice in the Global South: Claiming Rights (2017) and Resource Governance and Developmental States in the Global South: Critical International Political Economy Perspectives (2013).

is Assistant Professor at the University of Windsor, Canada. Focusing on the political economy of oil, gas, and mining, he writes about local content policies and industrial development. He is the author of The Petro-Developmental State in Africa: Making Oil Work in Angola, Nigeria and the Gulf of Guinea (2016) and co-editor of Energy, Capitalism and World Order: Toward a New Agenda in International Political Economy (2016).