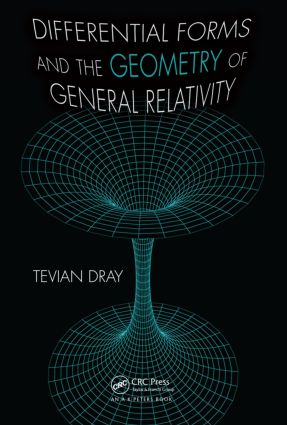 Differential Forms and the Geometry of General Relativity

Differential Forms and the Geometry of General Relativity provides readers with a coherent path to understanding relativity. Requiring little more than calculus and some linear algebra, it helps readers learn just enough differential geometry to grasp the basics of general relativity.

The book contains two intertwined but distinct halves.Designed for advanced undergraduate or beginning graduate students in mathematics or physics, most of the text requires little more than familiarity with calculus and linear algebra. The first half presents an introduction to general relativity that describes some of the surprising implications of relativity without introducing more formalism than necessary. This nonstandard approach uses differential forms rather than tensor calculus and minimizes the use of "index gymnastics" as much as possible.

The second half of the book takes a more detailed look at the mathematics of differential forms. It covers the theory behind the mathematics used in the first half by emphasizing a conceptual understanding instead of formal proofs. The book provides a language to describe curvature, the key geometric idea in general relativity.

"In this book, the author outlines an interesting path to relativity and shows its various stages on the way … The author inserts suggestive pictures and images, which make the book more attractive and easier to read. The book addresses not only specialists and graduate students, but even advanced undergraduates, due to its interactive structure containing questions and answers."

"…the presentation is very far from the ‘definition-theorem-proof-example’ style of a traditional mathematics text; rather, we meet important ideas several times, and they are developed further with each new exposure. This is a pedagogical decision which seems to me to be sound, as it allows the student’s understanding of the ideas to develop."

"This is a brilliant book. Dray has an extraordinary knack of conveying the key mathematics and concepts with an elegant economy that rivals the expositions of the legendary Paul Dirac. It is pure pleasure to see far-reaching results emerge effortlessly from easy-to-follow arguments, and for simple examples to morph into generalizations. It is so refreshing to find a book that does not obscure the basics with unnecessary technicalities, yet can develop sophisticated formalism from very modest mathematical investments."

"It took Einstein eight years to create general relativity by carefully balancing his physical intuition and the rather tedious mathematical formalism at his disposal. Tevian Dray’s presentation of the geometry of general relativity in the elegant language of differential forms offers even beginners a novel and direct route to a deep understanding of the theory’s core concepts and applications, from the geometry of black holes to cosmological models."

The Geometry of Special Relativity

Properties of the Schwarzschild Geometry

Warmup Differential Forms in a Nutshell

The Physics of General Relativity

A Review of Vector Calculus

The Algebra of Differential Forms

Technical Note on the Hodge Dual

Uniqueness of the Levi-Civita Connection

Geodesics on the Sphere

Integration on the Sphere