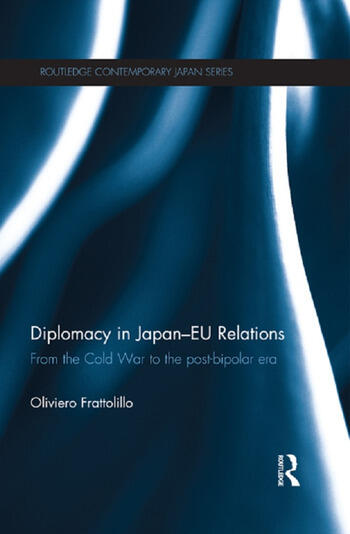 Diplomacy in Japan-EU Relations: From the Cold War to the Post-Bipolar Era

Since the 1950s, Japan-Europe relations have been characterised by a mutual coldness in terms of diplomatic dialogue, punctuated by a number of trade disputes. This book analyses the development of the political and diplomatic relationship between Japan and Europe, and shows that – especially during the Cold War years – whilst they share a wide range of political values and goals, the quality of diplomatic relations has often been sacrificed to both overcome trade issues and as a result of systemic factors.

Focusing on the institutionalization of relations between Japan and the EU, this book examines both the historical-diplomatic dimension and political-strategic discourse. It traces the historical development of the relationship from the post-war years, to the signing of the Japan-EU action plan in 2001, which marked a key turning point in the relationship. It goes on to examine the achievements and criticisms of ASEM, the Asia-Europe Meeting, which whilst meeting successfully for the past sixteen years, has also been condemned as little more than a talking shop. Crucially, Oliviero Frattolillo’s analysis clearly demonstrates how the interaction between Japan and the EU has been constructed on the basis of their perceptions of each other, thus underlining the inherent impact of different political identities, cultures and values on international relations.

Providing a keen insight into Japan-EU relations, this book will appeal to students and scholars of Japanese and European history and politics, as well as those interested in the history of international relations and security studies.

Introduction Part I: The Impact of the International Environment on Japan-EU Diplomatic Relations 1. Walking the Road of Low Diplomacy (1951-1979) 2. From Quiet Politics to Quiet Achievements (1980-2011) Part II: Mediating Actorness and Culture in Japan-EU Diplomatic Dialogue 3. Japan and the EU in the ASEM Framework: Mirrored Diplomacies 4. Actorness and Theoretical Divides 5. Conclusion

Oliviero Frattolillo is Assistant Professor at the University of Naples "L'Orientale", Italy.

"This book gives an excellent overview of EU–Japan relations from the Cold War until today. [...] this book provides a solid background to use in interpreting the present as well at the future."  - Marie Söderberg, Director of the European Institute of Japanese Studies at Stockholm School of Economics, The International Spectator

"Frattolillo, who had entered into social science by studying Japanese political philosophy, invites a new aspect into the analysis of Japan-EU relations. The Author not only investigates the diplomatic dialogues between Japan and the EU, but also sheds light on mutual perceptions and identities of both Japan and Europe.
The role played by the ASEM have already been well looked into by others and defined as “nothing more than a talking shop.” Frattolillo does not totally deny these views, but adds to the debate by arguing that mutual perceptions of Japan and the EU and their identities in economic, cultural and political issues have influenced and shaped the diplomatic dialogues and, accordingly, their roles played in both regions.
The strength of this book is that Frattolillo analyzes cultural and ideological aspects of both Japan and China. These new aspects allow him to discuss the EU’s potential and future role, if there is any, in East Asian security issues.
A highly recommended book for those who are interested in the weaker triangle of the US, Europe and Japan." - Hitoshi Suzuki, University of Niigata Prefecture, Japanese Journal of Political Science, Vol 17 Issue 01, March 2016, pp 135-137