Disagreeing Agreeably
Issue Debates with a Primer on Political Disagreement 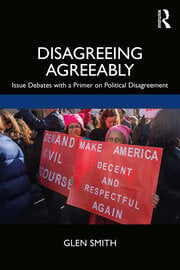 Disagreeing Agreeably: Issue Debates with a Primer on Political Disagreement

This book facilitates civil discussion of controversial political issues. Unique to this book is a section that explains how to discuss politics without feeling angry or hostile toward people who hold different beliefs. In addition, the book provides concise and accessible debates of contemporary policy issues including gun control, immigration, the Electoral College, voting, and affirmative action. For each topic, readers are shown that opposing arguments are based on values and concerns that are widely shared by most people regardless of their political leanings. Perfect for students, professors, and citizens alike, this book promotes civility without shying away from controversy.

Part 1: A Primer on Political Disagreement

Chapter 2: Where Opinions Come From

Chapter 3: Motivated Reasoning: How we Think and Reason About Politics

Chapter 5: Can We Talk? How to Engage in Civil Discussions about Politics

Chapter 6: Should Medicare be Expanded to Cover All Americans?

Chapter 7: Should College Tuition be Free for All Americans?

Chapter 8: Should Congress Increase Funding for the Military?

Chapter 12: Should Students be Allowed to Carry Guns on College Campuses?

Chapter 13: Should Congress Have Term Limits?

Chapter 15: Should Voting be Mandatory in National Elections?

Chapter 16: Should a National Popular Vote Replace the Electoral College?

Glen Smith is a professor of political science at the University of North Georgia. Although he teaches a variety of courses in American politics, Glen has spent most of his career teaching Introduction to American Government to students from all backgrounds and educational interests. Glen’s research focuses on the causes and consequences of political hostility, and he has written articles on this topic for political science journals including: American Politics Research, Political Research Quarterly, and Public Opinion Quarterly. Summaries of his work have also been featured on political news websites such as Psypost.org and Newsweek.

“Disagreeing Agreeably will get students to think about political disagreement in new ways, get them interested in talking with others about politics, and encourage them to get better educated about the issues they care about.” - Philip Neisser, Dean of Business and Liberal Arts, SUNY Canton, USA

“Glen Smith has written a highly readable text for students to better understand why polarization happens in the context of framing and civility. I highly recommend this engaging text that will help students make sense of major policy debates in American politics. This is an important book at an important time in our country.” - Paul E. Lenze, Jr., Northern Arizona University, USA